Organizations come together to launch ‘Koins for Kids’ fundraiser

JACKSON, Tenn. — You can help ‘change’ a young person’s life for Christmas. 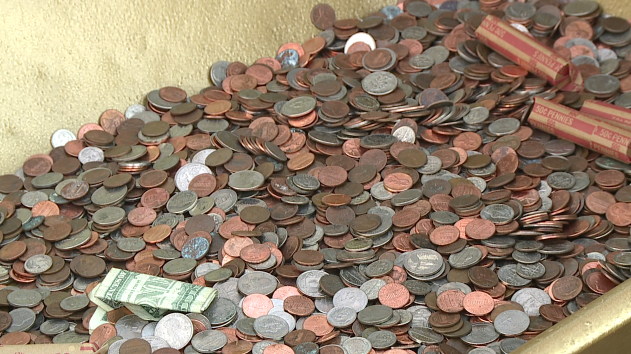 One fundraiser wants to bring some jingle into the lives of 424 West Tennessee teens.

“He felt like the teenagers were a little left out at Christmas. It’s a lot easier to buy for the younger kids,” said Rita McCaslin, volunteer for Carl Perkins Center and the chairperson of Rusty Mac Adopt-a-Teen Christmas Fund.

In 1997, local radio DJ Rusty Mac lost his son at 3-days-old. A few years later, he decided to make an impact on young people in the area.

“When his son would’ve been 13, he wanted to do something for a teenager because he couldn’t do anything for his own child. So he called the center and asked if there was a 13-year-old boy he could buy Christmas, and that’s what he did,” McCaslin said.

Now, the Carl Perkins Center for the Prevention of Child Abuse, the Jackson-Madison County School System and others came together to kick off the first annual “Koins for Kids” to benefit the Rusty Mac Adopt-a-Teen Christmas Fund on Thursday.

This program serves teens that are served by the Carl Perkins Center and helps buy them Christmas gifts.

“The social workers ask the teens what they would like to have, and many of the things on their list are things you wouldn’t think of, like toothpaste and a toothbrush, underwear, things like that that most of us take for granted,” McCaslin said.

“Most of the time, we get several that say they want something for their little brother or sister, so it’s just a really touching event,” she said.

McCaslin says a young man in the center received gifts from this fund, and shared how it helped him.

“He told us later, after he got to be an adult, that it changed his life because somebody cared enough about him, somebody they didn’t even know, to make that donation,” she said.

You can drop off your change again Friday at the corner of Shannon and Lafayette Street in downtown Jackson from 8 a.m. to 6 p.m.