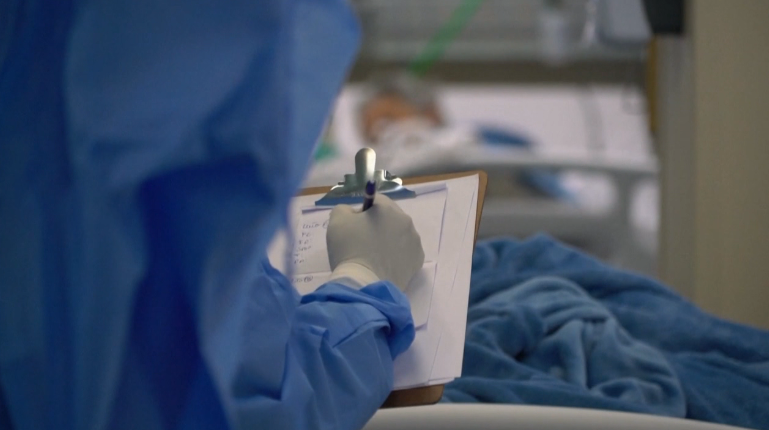 “We’re not able to transfer even from our own facilities,” Ross said. “We do make some exceptions because we are the designated heart, as well as, stroke centers.”

He says they typically transfer by ambulance about 50-60 patients a day.

The hospital currently has 573 patients, 103 of whom are COVID-positive.

Ross says they still have enough space for 200 COVID patients, but their biggest problem is staffing.

“When you take out 10 RNs out of Jackson General, 18 RNs out across the entire system, and then you add in there the other clinical folks and support staff, that is a crippling thing for us,” Ross said.

Regional Hospital Coordinator Wayne Arnold said this could be slowed down if people just picked up the phone when the health department calls.

“If we can get people to quarantine and isolate as they should, we can rapidly slow this thing down,” Arnold said. “But, if you’re not going to answer our calls or lie to us about your contacts, we’re going to continue floundering like we are.”

And Jackson-Madison County schools are still showing us their numbers on a school-by-school basis, including the sharp increase in COVID absences from Monday to Wednesday — causing them to rethink their Thanksgiving plans.

“We see a really high number in our quarantine, and we’re seeing high numbers in our student isolation cases, which is very concerning,” said JMCSS Superintendent Dr. Marlon King. “As I think of students returning home to parents and grandparents, that really concerns me. So it’s more of a safety protocol for the community.”

No one will be at school the week of Thanksgiving. Teachers, along with students struggling in class, will be working from home.

“We think suspending classes for those two days will allow us to assess buildings and also engage with our senior leadership team,” Dr. King said. “So we can think about what learning is going to look like moving forward after the Thanksgiving break.”

The health department also said they’re having meetings on distributing the Pfizer vaccine in Madison County. Tennessee was one of four states chosen for clinical trials, and officials say we should get more information in coming weeks.