Clouds Will Move out this Evening and it Will Get Cold Again Tonight! 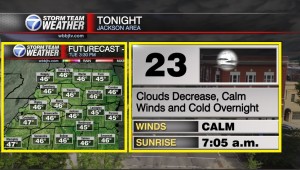 Most of West Tennessee dodged some light snow showers on Monday. Some locations picked up a good half inch while most of the region just saw a dusting of snow. As the clouds move out tonight, a chilly air mass is going to be left behind for us. Tuesday is expected to be cold, but 50s and sunshine are both in the forecast though. Find out when right here.

The snow will taper off into the evening and the clouds will move out overnight making for a cold night. Clear skies and calm winds by the morning will allow temperatures to fall down into the low 20s.

Sunny skies will return by the afternoon but it will remain chilly. Highs will only reach the mid to upper 40s. The winds will be light out of the southwest between 5-10 mph.  Overnight lows will drop into the upper 20s.

We should see 50s return by the afternoon and will continue to see plenty of sunshine. Some clouds will move in late and the winds will stay light out of the southwest.  Overnight lows will dip down to around freezing of 32°.

The warmest weather we have seen in awhile will show up for Thursday. Highs should reach the mid 50s with partly cloudy skies. The temperatures will be aided from some breezy south winds between 10-15 mph.  The next front is expected to pass by on Friday dropping temperatures some and keeping the winds around on Friday as well.

Wet and Windy Next Few Days

Sunny For Today Ahead Of The Rain