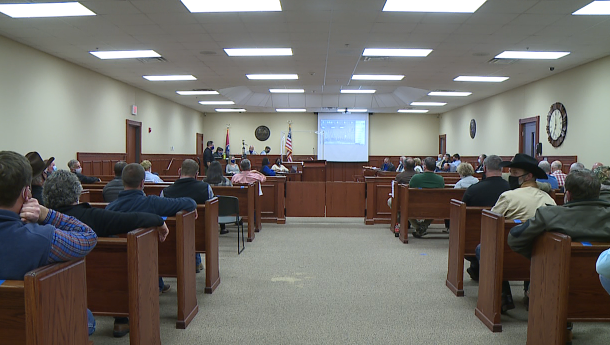 Commissioners discussed several topics, one of them from concerned residents asking the county commission to have the board of health regulate potential large chicken farm operations.

“My understanding is that we had a health board in place since 2018, but it wasn’t up to Tennessee standards, and what we have asked them to do is to come back and look at regulating poultry farms,” said Karissa White, a Henderson County resident.

“A lot of people in this community have concerns and fears about those operations, and we are working to achieve a way that they can still exist in the county,” said Jackie Washburn, a Henderson County resident.

Those attending Tuesday’s meeting say chicken farms could pose several health threats to their communities. They believe a board of health can help protect them.

“What we are asking them to do is not regulate agriculture, but actually businesses that are coming in that can impact citizen’s health,” White said.

“Public health board of the county may adopt regulations to protect the health and safety of the citizens, and that includes agriculture,” Washburn said.

Others say the farms are beneficial to agriculture.

“It gives them a steady income for farmers that are looking for ways of getting that steady money coming from week to week, month to month,” said David Blankenship, a county resident.

“It gives people an opportunity to do other things instead of just one income, and it’s a year round income. It’s not something that these farmers have to wait on from one season to the next,” said James Beaty, a county resident.

“If people would just take the time to research and find out what chicken barns are about, what chicken operations are about, I think that they would find that this is not really as bad as they think,” Blankenship said.