JACKSON, Tenn. — North Madison County and Gibson County were two of the hardest hit places for snow this week, and it’s making life difficult for the people who live there. 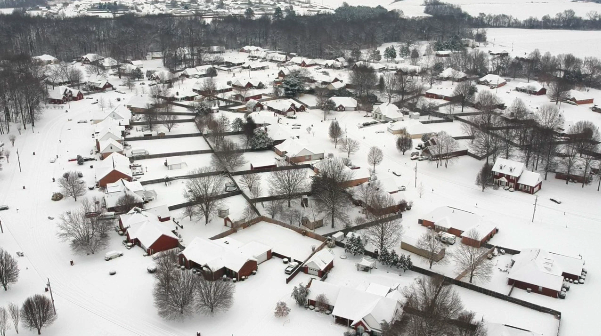 Three Way resident Johnny Estes says he hasn’t seen snow like this since he was a student at Freed-Hardeman University in 1968.

“It was warmer then and melted away in probably two or three days,” Estes said. “This is probably going to be here a week.”

He measured 8 inches of snow in his front yard in Three Way, and hasn’t left the house all week.

There’s so much snow that businesses in Milan are having problems getting deliveries.

“We haven’t gotten any deliveries. No trucks since the snow started,” said Milan Corner Store owner Rocky Patel. “So, we didn’t get any trucks of gas, beer, cigarettes, nothing.”

“I saw one pink carton of eggs, and I thought if a couple of them are broken, I don’t care,” said Milan resident Mary Reel. “I opened them up, and thought, ‘Yay!’ It was a blessing: the last carton of eggs. No milk. But, the Shell Station, I’ll give a plug for them. They still have the individual cartons of milk.”

Patel said it may even affect his business if he can’t get a gas truck in soon.

“We’re also running low on gas too, so maybe I can make it today or tomorrow, you know?” Patel said.

“This is the third place I’ve been to, and I’m glad they’ve got gas because we’re going to Memphis,” said Milan resident Jason Hornsby.

And it’s taking a team effort in Dyer to get people what they need the most.

“We’re offering to go out and get groceries, get medication, anything that someone might need,” said City of Dyer Mayor Chris Younger.

“We’re going and pulling people out of cars, out of ditches, unfroze water pipes,” said volunteer firefighter Craig Anderson. “We’re going to go out and fix some water pipes, help them out so they’ve got water.”

“It’s small town living. You know, it’s what we do here. We help each other,” Mayor Younger said. “We’ve got farmers out on tractors and everything clearing roads, and we’ve got our city crew. We’ve got our fire department. You know, it’s really nice to have community help.”

The Trenton and Milan Fire Departments are also offering the same services.

If you need assistance getting food or medication, you can just call your local fire department’s non-emergency line.