JACKSON, Tenn. — An officer was injured after responding to a reported domestic assault on Thursday. 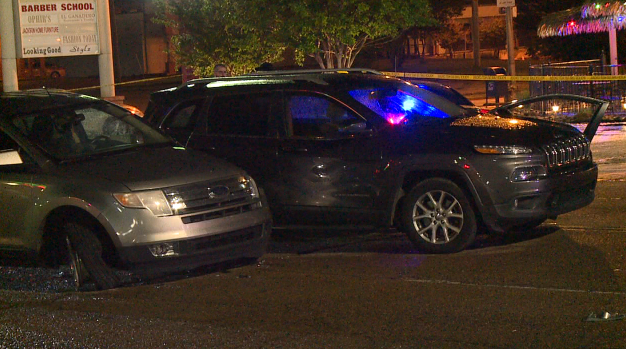 Thursday night, Jackson police responded to the Clean Machine Coin Laundry on Carriage House Drive after a call about a domestic assault.

Police say the suspect David Lauderdale was strangling and attacking a woman. Police say he was already in his vehicle when the first officer arrived.

Lauderdale put his vehicle in reverse, pinning the officer between his patrol car and Lauderdale’s vehicle.

Police say Lauderdale hit another vehicle when he tried to leave the area, and Lauderdale eventually ran to the Sakura Japanese Restaurant.

Lauderdale was eventually arrested at Sakura, where he continued to struggle with officers.

Sakura Restaurant employee Rylee Blakney says she heard a loud noise and thought it was an incident involving customers.

“And then I turned around and saw that. It was a really tall police officer, and a guy struggle to get away, and he keeps on running through the restaurant,” Blakney said.

She says during the fight, employees were making sure the customers in the restaurant were safe.

“After all that happened, they got up and they backed up, but we did have a bunch to try surrounded the cop. I was like, ‘Look y’all, give the man some space’ because we we’re all shook,” Blakney said.

Blakney says while still in shock, the officer apologized for the disturbance.

“The cop came back in and he apologized for causing a disruption. We was like you’re just doing your job,” Blakney said.

Police say he was taken to a hospital in Nashville, where he underwent surgery and is now in stable condition.

Police say Lauderdale is a known gang member and has prior felony convictions.

He is also currently on probation in Davidson County. Lauderdale is in custody at the Madison County Criminal Justice Complex.