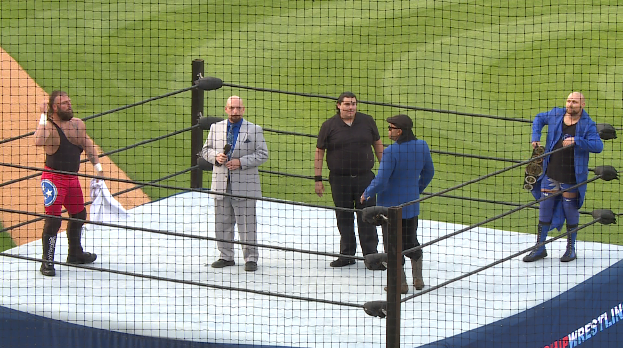 Wrestling fans came to the Jackson Ballpark to cheer on their favorite wrestlers and also boo their opponents. Professional wrestler and announcer for the matches, Jason Jones said this is an event you won’t want to miss.

“We’ve got the battle at the ballpark. We’ve got legends and we have the top superstars of today coming in and out. We’re going to have a big night. Ten action-packed matches here at the ball field. It’s going to be absolutely amazing,” Jones said.

Fans were able to meet and greet several famous names in wrestling on legends row. Jones said his favorite wrestler to watch is Jerry “The King” Lawler and fans are not going to want to miss that match.

“You have to come out and watch the King in action. We celebrated his 50th Anniversary right here a few months back and this place was rocking and rolling but the King is a must,” Jones said.

Another wrestling fan has a different favorite wrestler in mind. Eric Peacock says wrestler, Thunder Rosa, will blow you away.

“The best in the world and that’s why we are here. Ladies and gentlemen, the technical skill and unparalleled excellence you will witness in the ring tonight from Thunder Rosa will blow your socks off,” Peacock said.

Jones says this event is where fans can see favorite legends and maybe even future legends.

“This is the place to catch not only the legends of wrestling but up and comer. The future of professional wrestling,” Jones said .

Along with wrestlers Thunder Rosa and The King, other wrestlers that competed included former WWE superstar Carlito and other local wrestling talent.