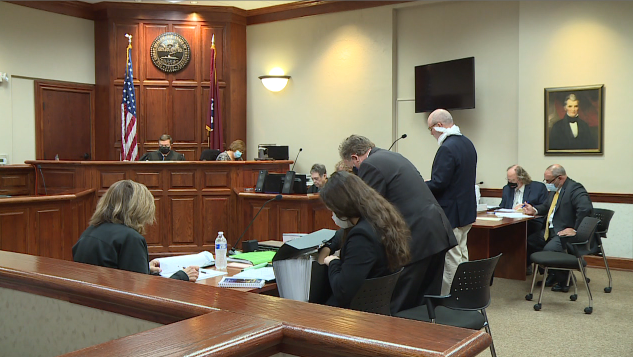 The first of the day was Amanda Crowe.

Crowe is charged with vehicular homicide, vehicular assault, DUI and other charges.

Court documents say in June 2020, Crowe was driving on Highway 79 in Carroll County and crossed over the center lane. She struck an oncoming car, killing Corey Douglas and seriously injuring a child.

Court documents say Crowe’s blood alcohol level was above the legal limit, and she was also under the influence of an intoxicant.

The judge set her court date for June 14.

Next was Jonathan Hendrix.

Court documents say in October 2020, Hendrix stabbed his wife in the neck twice, and told her he would “watch her bleed out.”

The indictment then says he put concrete blocks on top of her body while she lay injured.

Hendrix is also facing assault charges after an incident in the Carroll County Jail, where he refused to go back to his cell and fought officers who tried to restrain him.

Hendrix’s arraignment was reset to later in the day.

Diann Hicks was up next.

She is charged with second-degree murder, aggravated assault, and leaving the scene of an accident.

Court documents say she intentionally ran over Greg Hicks repeatedly, killing him in July 2020. She did not have a lawyer, and the judge assigned her a court date.

Joseph Wert was the last to appear. Wert is accused of first-degree murder.

Back in January 2020, police responded to Moss Creek Road in Cedar Grove to reports of a shooting.

The affidavit says, the police found Larry Gene Watkins Jr. dead of an apparent gunshot wound on the property.

Deputies located Wert, who then stated to deputies that he shot Watkins Jr, according to court documents.

Court documents say Wert’s mother, Susan Wert, was on the property at the time as well, and she was the one who called deputies to report the shooting.

She did not give a statement, court documents say.

The judge set his trial for June 14.

More than 70 others were arraigned on Monday.