MADISON COUNTY, Tenn. — Madison County is set to buy new voting machines in the next few months. But where will they store them? 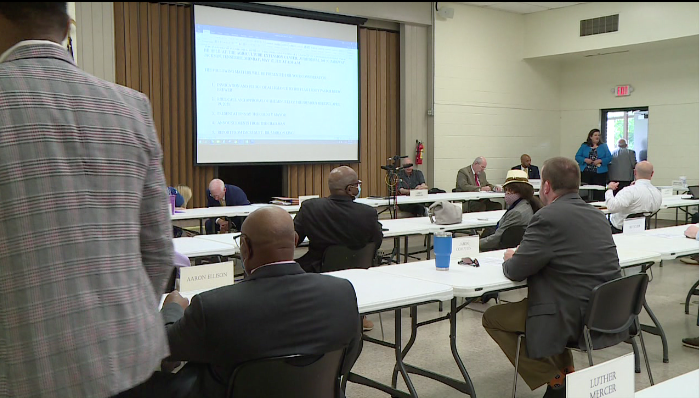 As we’ve previously reported, there’s not enough room for the new, larger voting machines at the election commission office.

The administrator of elections wants to store them in the small conference room at the Ag complex, but other people who use the space don’t want it to interrupt normal business.

“There’s a couple of things we’re exploring, like I said, Superintendent King announced, when they move out, that’s going to free up a lot of space we can use,” said budget committee chair Doug Stephenson.

With the school system’s new ESSER 3.0 money, they plan on moving central office to Madison Academic, freeing up the space for the election commission.

The commission voted 18-5 to temporarily store the new machines in the small conference room until they can — hopefully — move them to central office.

Jackson-Madison County Schools Superintendent Marlon King says all construction work has shifted from Madison Academic to the Jackson Central-Merry construction project, so hopefully those students will be in their building by August. Then construction crews plan to finish work at Madison.

And the county plans on spending $5,000 to secure windows at the Beech Bluff Community Center. The insurance committee says there has been some vandalism, and they need to make sure the building is secure.

“We’re going to put some metal sheeting over the windows, and what that’s going to do is help us with any type of liability insurance,” Stephenson said.

And work is continuing on next fiscal year’s budget, expected to be finished by next month.

“We’re meeting tomorrow,” Stephenson said. “We’ve got to tie some loose ends up.”

But the Madison County Commission is still trying to figure out how they’re going to use $19M in COVID relief funds. They’re having a meeting with the comptroller’s office June 2.

The Jackson Chamber also gave an update on the Great Wolf Lodge project, saying if local organizations can get funding worked out, the project can move to the next phase.