JACKSON, Tenn. — A fitting dedication, the day before Juneteenth is celebrated federally for the first time. The Tennessee Historical Commission dedicated a historical marker to the African American men from Madison County who fought for the Union Army in the Civil War. 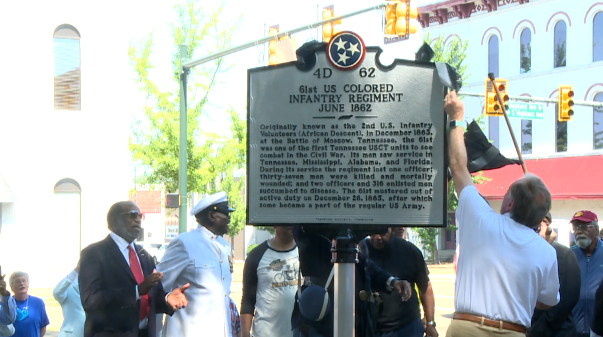 “It’s an untold story in our history, in African American history,” said Michael Cherry, who initiated the effort to build the marker.

Cherry spent over five years researching and advocating for the marker.

“I’ve lived in Jackson all my life and never heard we had men who fought in the Civil War for the USCT,” Cherry said. “So when I heard that, it peaked my curiosity.”

Hundreds of men made up the 61st Infantry Regiment. 100 of them were from the Jackson and Madison County area. They traveled places like Moscow, Johnsonville, Memphis, and Tupelo. 38 of them died in battle. And, over 300 of them died due to illnesses. 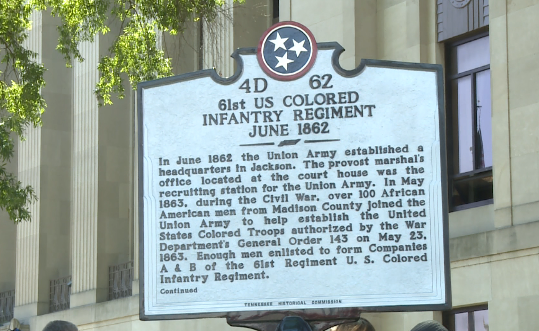 “They were one of the first USCT units to come under fire and to be in combat,” Cherry said. “They distinguished themselves so well that there’s a historical marker in Moscow, Tenn., that states how well they fought and how brave they fought.”

Now, two of their descendants are keeping up their legacy.

Kenneth Hurt served in the Navy for 25 years.

“When I think about my ancestors, the Hurts, they ran away from slavery, and they joined the Union Army,” Hurt said.

And Harrell Carter serves as the President of the Jackson-Madison County chapter of the NAACP.

“They fought for their freedom, and they achieved their freedom of which we are also doing today,” Carter said. “And particular on this holiday, Juneteenth, it has special recognition.” 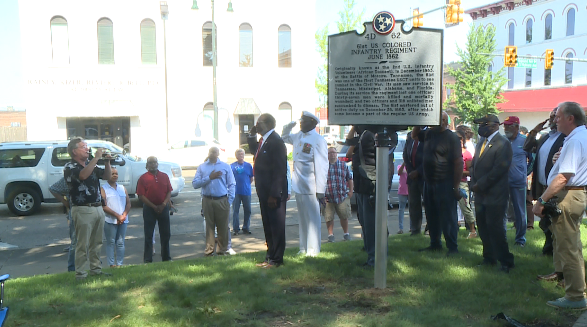 The marker sits on the west side of the courthouse, near the corner of Main Street and North Highland.

The Jackson-Madison County NAACP released a statement about the marker Friday evening, saying:

“Over 155 years ago a thousand or more slaves of Madison and other surrounding West Tennessee Counties volunteered at the Madison County Courthouse in 1863 to fight for their freedom doing the Civil War. The unveiling of a ‘Tennessee Historical Marker’ on the northwest corner of the Madison County Courthouse lawn recognizing the bravery, the spirit, and sacrifices made on a continuum fight for freedom.  That freedom sought then as it is now, incomplete. The tragedy of the moment, however, is that we continue to fail to meet the moment in educating our children about their history. We must encourage our local school systems, public and private schools to purposely include all history, not the present-day incomplete version. It is, however, especially gratifying that on this the first official celebration of ‘Juneteenth’ as a National Holiday will help to achieve true freedom, by overcoming the fears of our past.”