GIBSON COUNTY, Tenn. — Officials are dedicating a cemetery marker to a former state representative who made a lasting impact for women in Tennessee. 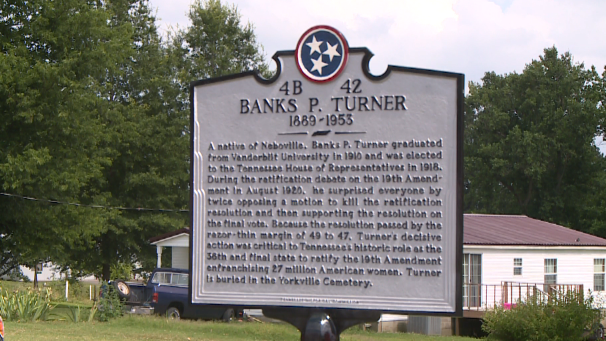 On Friday state officials and many from the Gibson County community were seen standing in front of the Yorkville Cemetery.

There’s a new cemetery marker for Banks Turner, a state representative in 1920 who was the deciding vote and advocate for women’s right to vote in Tennessee.

“He is not known for that event that changed over half of the United States, because we got the right to vote,” said Gwen McCartney McReynolds, organizer of the event.

Men and women held yellow roses to represent the women’s suffrage movement and dedicated a book to Turner’s life.

McReynolds says she hopes people will take time to further learn about women’s rights and why it is important.

“Well in Tennessee, we need to learn it was more than one person involved. There are so many people that made women’s suffrage a reality. Banks Turner was one of them, but students need to learn that history can sometimes be hidden,” McReynolds said.

Yellow roses were also placed on Turner’s grave site by people in the community.

Tyson in Humboldt hands out foods and job opportunities