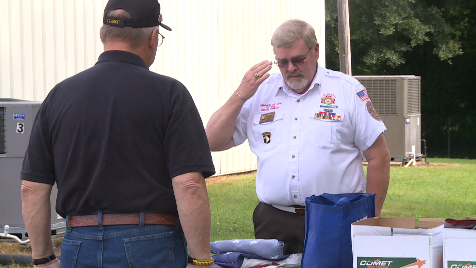 “It feels sensational. I wish every person in America would see this and realize, this is how we do things. This is America. That flags stands for so many things, but most of all the men who gave their lives for this great country,” said VFW Post 6496 Commander Thomas Buck.

The purpose of the ceremony was to dispose of donated flags that were given to the VFW post which have been damaged and no longer able to fly.

“A person who is a patriot, like the people here today, they get a portion of the flag which has been cut, and it allows them to join the ceremony,” Buck said.

The veterans who attended say the ceremony is significant to dispose of each flag properly. They say they hope everyone will do it this way.

“I wouldn’t want to be anywhere else. Not only celebrating our country’s birth, but also the flag retirement ceremony and teaching and educating people that there is a protocol in retiring a flag,” said retired Lt. Col. Joseph Lane.

“People, I know, gather them up and just throw them into trash. That’s not the way. Remember the flag covered the coffin of every soldier that has come back from this country, and it means a lot,” Buck said.

After the ceremony, the ashes were put in a case to be buried with a marker to display.

If you’d like to donate a damaged flag to be properly disposed of, you can drop it off at VFW Post 6496 on Airways Boulevard in Jackson, or at American Legion Post 9.