U.S. Marine receives celebrates a promotion with family and friends

CEDAR GROVE, Tenn.– A U.S. Marine came back to where it all started to celebrate with his family. 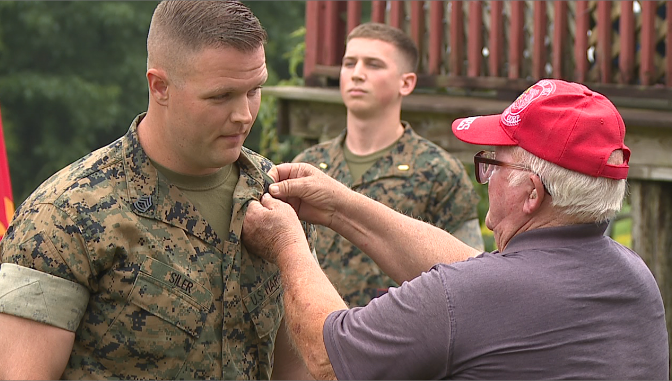 Derek Siler was promoted to Gunnery Sergeant in the U.S. Marine Corps on Sunday and pinned by his own grandfather, a former marine.

As a third generation Marine, Siler wanted to have a different kind of ceremony, which would bring him back to his roots and allow his grandfather to be a part of it.

“For them to get to see what it looks like for their loved one to kind of climb the ranks and do well for themselves, gives them an opportunity to enjoy it as well and almost live vicariously, in a way,  to see a part of their family be successful kind of tells them as a whole that we are successful,” Siler said.

Siler admired both his father and grandfather growing up, and said that is where he first got the passion to enlist.

Siler’s grandfather, Chester Siler, said he is honored to be able to pin his grandson with this title.

Commandant Bryce West with the Capt. Jack Holland Marine Corp League Detachment said when Siler asked them to join in the ceremony, they were more than willing to make that happen.

“We are a Marine to the day we die. To be here today to honor him and to be with our other Marine brothers that are on active duty is just a wonderful honor,” West said.

Siler said even though he has climbed the ranks, he will never forget where he came from.

“My opportunity to bring back everything to home and not forget where I came from,” Siler said.

Siler said he is grateful to everyone for making this honor so special.