On August 8, 1974, President Richard Nixon, facing damaging new revelations in the Watergate scandal, announced he would resign the following day. 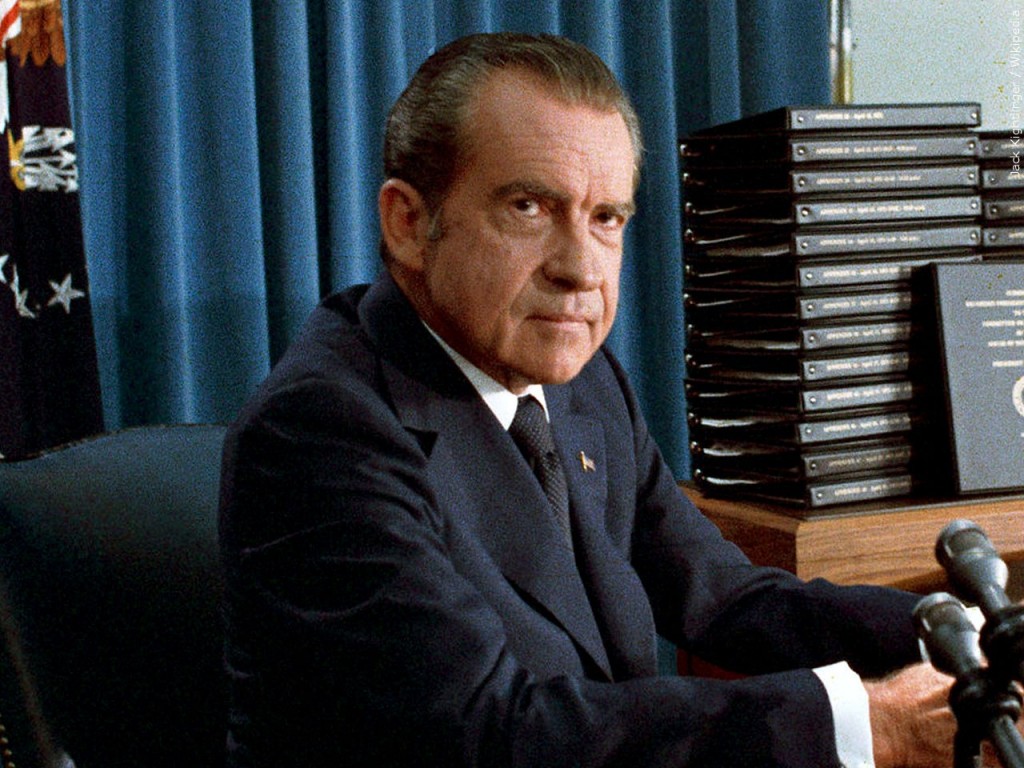 In 1814, during the War of 1812, peace talks between the United States and Britain began in Ghent, Belgium.

In 1815, Napoleon Bonaparte set sail for St. Helena to spend the remainder of his days in exile.

In 1937, during the Second Sino-Japanese War, Japan completed its occupation of Beijing.

In 1942, during World War II, six Nazi saboteurs who were captured after landing in the U.S. were executed in Washington, D.C.; two others who cooperated with authorities were spared.

In 1963, Britain’s “Great Train Robbery” took place as thieves made off with 2.6 million pounds in banknotes.

In 1973, Vice President Spiro T. Agnew branded as “damned lies” reports he had taken kickbacks from government contracts in Maryland, and vowed not to resign — which he ended up doing.

In 1994, Israel and Jordan opened the first road link between the two once-warring countries.

In 2000, the wreckage of the Confederate submarine H.L. Hunley, which sank in 1864 after attacking the Union ship Housatonic, was recovered off the South Carolina coast and returned to port.

In 2003, the Boston Roman Catholic archdiocese offered $55 million to settle more than 500 lawsuits stemming from alleged sex abuse by priests. (The archdiocese later settled for $85 million.)

In 2009, Sonia Sotomayor was sworn in as the U.S. Supreme Court’s first Hispanic and third female justice.

In 2017, singer Glen Campbell died in Nashville, Tennessee, at the age of 81; he had announced in 2011 that he’d been diagnosed with Alzheimer’s disease.

Ten years ago: Eager to calm a nervous nation, President Barack Obama dismissed an unprecedented downgrade by Standard & Poor’s of the U.S. credit rating from AAA to AA-plus, declaring: “No matter what some agency may say, we’ve always been and always will be a triple-A country.”

Five years ago: A fire and power outage at a Delta Air Lines data center in Atlanta resulted in the cancellation of 2,300 flights over a four-day period. At the Rio Olympics, Ryan Murphy gave the Americans their sixth straight gold medal in the men’s 100-meter backstroke, winning with a time of 51.97 seconds; Lilly King of the United States won gold in the women’s 100-meter breaststroke in 1 minute, 4.93 seconds.

One year ago: A fire inside a police union building led authorities in Portland, Oregon, to declare a riot and force protesters away from the office as violent demonstrations continued in the city. The Mid-American Conference became the first of the conferences competing at college football’s highest level to cancel its fall schedule because of the coronavirus. (The conference later became the last to reverse course, scheduling a six-game regular football season.)