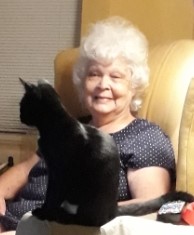 Barbara was born August 22, 1943, the daughter of the late William David “Buddy” German and Elizabeth “Lizzy” German. She owned a house cleaning service for many years. Barbara enjoyed her cats, housekeeping, and gardening.

Graveside Services for Mrs. McCullough will be held at 12 noon Thursday, September 23, 2021 at Hood Cemetery in the Warren Community. The officiating minister will be Bro. David Reeves, pastor of Midway Baptist Church in Whiteville, Tennessee.