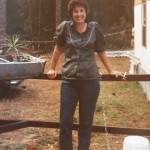 Sherryl Lynn Baxter, of Camden, Tn passed away October 9, 2021 surrounded by her family.
Sherryl was born on May 19, 1947 to Barbara and Ernest Roach. After graduating high school, she continued her education to become licensed in a variety of fields. Everything from owning her own business, to practical nursing, to her CDL’s as a long haul trucker driver. And many jobs in between, such as running a jackhammer at a cement plant. Her amazing wit and sense of humor was a constant in her life. If you said she couldn’t do it, she made sure she did. Her working career spanned over 50 years, all while being a fiercely dedicated mother to her six children, and making it her mission to improve their lives.
In 1988, she met Mike Baxter and the two were inseparable from that point
on. Sherryl and Mike were married for over 30 years and together cared for grandchildren and great grandchildren.
Sherryl excelled at propping up members of her family and supporting them through the many passions and difficulties of their lives. Family came first and was above all else to her, a value she instilled in those around her. The hole left by her absence is impossible to fill.
Sherryl is preceded in death by her parents, sister Pat-Marie “Patty” Roach, brother Mike Pherson, daughter Tracie Lovelace, and grandson Daniel Lovelace. She is survived by her husband Mike Baxter; sister Tonya (Scott) Hurt Lusk; her five children Winfred Lovelace, Robbie Lovelace, Marshall Wilson, Elizabeth Wilson, and Jennifer Wilson; seven grandchildren Burlon, Tristen, Raelyn, Amber, Jennifer, Zebulon, and Maximus; and an abundance of extraordinary great grandchildren including Brynleigh and Corbin.
No services will take place, as Sherryl requested, but we do appreciate your love and support during this difficult time.
Attachments area
Share this...