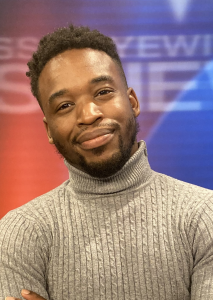 Jeremy Jackson joined the WBBJ 7 Eyewitness News team in November 2021 as a Multimedia Journalist. He was born in Memphis, TN.

Jeremy attended college at the University of Memphis were he received his bachelor’s degree in Journalism and Strategic Media and minor in Photography.

He discovered his passion for journalism in high school when he joined the Teen Appeal at the University of Memphis.

Jeremy stated that he has always had a passion for writing and uncovering the truth of the world.

“In this super corporate world, reporting is one of the jobs that make me feel… well, human. There is no other job where I can connect with a stranger on a personal level and hear their opinion on anything ranging from sports to politics and because of that, I wouldn’t change it for the world.”

During his time at the University of Memphis, Jeremy worked for the print publications The Daily Helmsman as well as Edible Memphis.

He also interned with Tiger News and Meeman 901.

During his free time he does commercial photography, produces music, record/edit videos, travel and spend time with his family and friends.

You can reach Jeremy with news tips and story ideas at jjackson@wbbjtv.com.