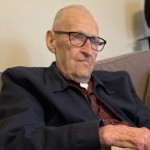 Elmore was born April 10, 1933 in Kirks, Tennessee, the son of the late Leroy Van Stephens Petrowski and Robbie Lee Hill Petrowski. He served his country for eight years in the United States Army Reserves and the National Guard. He was married January 26, 1956 to the former Connie Feathers and was employed as a mechanic for many years before his retirement. Mr. Petrowski was a hard-working man who would give the shirt off his back to anyone that needed it. He loved watching his kids play ball and his son during clown rodeos. He enjoyed fishing and watching western movies and Monday night wrestling.

In addition to his parents, he was preceded in death by his daughter, Jan Bennett; his granddaughter, Brandy Fears; and several brothers and sisters.