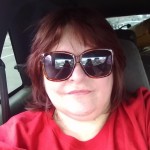 Patricia was born March 20, 1970 in Memphis, Tennessee, the daughter of the late Herman Eugene Glover, Jr. and Sherry Ann Mills Glover. She received her education in the Fayette County School System and was of the Baptist faith. She was a homemaker throughout her life and loved being with her children and grandchildren. Playing the lottery was a favorite pastime.

A private interment for Mrs. Oliver will be in the Perry Cemetery at Laconia, Tennessee.