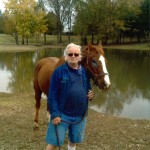 Bubba was born September 8, 1950 in Memphis, the son of the late Herbert Bailey Boswell, Sr. and Ruby Rainey Boswell. He was employed as an Iron Worker and retired from Local Iron Workers 167. He loved the outdoors and his favorite thing to eat and drink was doughnuts and milk. Bubba was married in 1992 to his wife, Amy Baker Boswell, and they have been inseparable ever since. He had a love for all animals and leaves behind his dog, Daizee Mae, eight cats and two horses, Cutter and Precious.

Mr. Boswell is survived by his wife, Amy Boswell of Oakland, TN; his daughter, Carey Boswell of Raleigh, TN; his brother, Ronnie Boswell of Memphis, TN; and his granddaughter, Rebecca Blue Violet Boswell. In addition to his parents, he was preceded in death by his sister, Bettye Anthony.