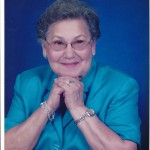 Beatrice was born September 11, 1925 in Cuero, Texas, the daughter of the late Enrique Ruiz and Mary Sanchez Ruiz. She was of the Catholic faith and employed in accounts receivable for Ely and Walker before her retirement. She volunteered at Baptist DeSoto Hospital in Southaven, Mississippi and enjoyed reading and traveling.