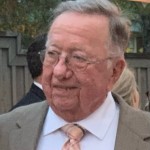 Ronald was born August 31, 1936 in Clifton, New Jersey, the son of the late Alexander and Ethel Beyer. He was employed as a sales representative for Clemco Company and was married July 5, 1985 to Margaret Anne Riales Beyer. He was a member of First Presbyterian Church of Somerville and a longtime member of Loyd Presbyterian Church in LaGrange, Georgia. He loved spending time with his family and friends that he treated like family. Ronald enjoyed traveling, boating and volunteering. His volunteer work included Fayette Cares, Mid-South Transplant and for 17 years, he and his wife volunteered at the St. Jude FedEx Golf Tournament. Ronald was also a member of the ROMEO Club (Retired Old Men Eating Out).

In addition to his parents, he was preceded in death by his son, Bryan Beyer; two brothers, Robert Beyer and Walter Beyer; and two grandchildren, Nathan Schmitt and Amelia Bartholomew.