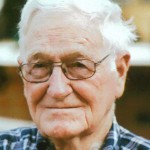 Harold was born April 30, 1928 in the Bethlehem Community of Fayette County, the son of the late C.E. Pattat, Sr. and Ethel Sims Pattat. He graduated from Fayette County High School where he played football and was a farmer for all of his life. He was a member of Oak Grove United Methodist Church and attended First United Methodist Church of Somerville. Harold was a member of the Tennessee Farm Bureau and enjoyed working on his farm and being on his bulldozer. He loved his mules and participated in Mule Day in Columbia, Tennessee.

In addition to his parents, he was preceded in death by his first wife, and childhood sweetheart, Mabel Jean Tapp Pattat; his second wife, Lucille Tapp Pattat; his son, C.N. “Rod” Pattat; and his brother, C.E. Pattat, Jr.