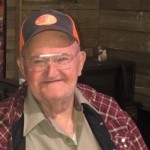 Jack Norris McCulley, age 88, resident of the Burrowtown Community and husband of the late Doris Inez McCulley, departed this life Monday morning, February 14, 2022 at his home.

Jack was born May 6, 1933 in Braden, Tennessee, the son of the late Bedford Turner McCulley and Addie Phillips McCulley. He served his country and retired from the United States Air Force and served on the Fayette County Sheriff Department. Jack was a Mason and enjoyed barbecuing, cutting wood, playing poker and chewing tobacco.

In addition to his wife and parents, he was preceded in death by four sisters and six brothers.