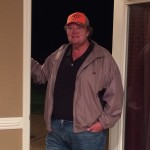 Richard was born May 10,1959 in Oklahoma City, Oklahoma, the son of Jim and Beulah Krahl. He graduated from Putnam City High School in Oklahoma City and attended Oklahoma State University. He then started his career in OKC as a homebuilder. Later moving to the Dallas area building homes and raising his girls, Allie and Misti. Years later he relocated to West Tennessee and was a homebuilder for the remainder of his career in Fayette County, Shelby County and Mississippi.  Richard loved his girls and his family, entertaining, fishing, golfing, traveling and OU and OSU football.