Jersey Mike’s partners up for 12th annual Month of Giving

JACKSON, Tenn. — Jersey Mikes is partnering up for its 12th annual Month of Giving. 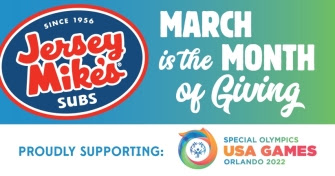 The news release says Jersey Mike’s will be accepting donations from customers at stores across the country.

The release say special deals can also be found on their Twitter and through Jersey Mike’s email club.

Donations can be made in-person or through their app.

You can read the full new release here.