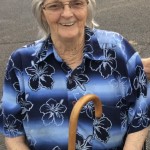 Lena was born March 17, 1942 in Hickory Valley, Tennessee, the daughter of the late Mitchell Brown and Maudie Henley Brown. She was employed as a seamstress at Joseph’s Interiors in Memphis, Tennessee for many years before her retirement in 2008.

In addition to her parents, she was preceded in death by three sisters, Ann, Helen and Elizabeth; and three brothers, Bill, Otis and Boyd.