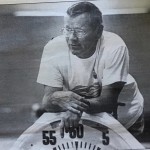 Fadgen was born December 8, 1935 in Woonsocket, Rhode Island, the son of George and Amelia Fadgen. He married Pauline “Polly” Guay, also of Woonsocket, on April 23, 1960, and the loving couple spent their 58 years of married life together as converted southerners, almost exclusively in Memphis. Polly preceded Dick in death with her passing on October 7, 2018.

Fadgen spent more than thirty years at the University of Memphis teaching a variety of classes, including, among others, racquetball, swimming, and bowling. But his real passion was the competitive swimming program he founded in December 1970 at the historic Kennedy pool on what is now known as the university’s South Campus. Fifty-two years later Memphis Tiger Swimming is still recognized as one of the preeminent club programs in the country, regularly producing national caliber swimmers. During Fadgen’s tenure the program boasted multiple Olympic medalists and developed scores of NCAA athletes.

A great swimmer in his own right, Fadgen won several national championships at North Carolina State University, his alma mater from which he graduated in 1958. He traveled extensively as a national team member, participating in the 1955 Pan American games, as well as international competitions in Hawaii, Japan and elsewhere. In 1954, at a meet at Yale University he broke the world record in the 200 Breast. In his later years he became an accomplished triathlete, never allowing himself to venture too far from the water. He continued to assist and mentor coaches throughout the Memphis area and was regularly consulted for coaching help and advice.

Memorial Services for Mr. Fadgen will be held at 10 A.M. Saturday, May 21, 2022 at St. Philip the Apostle Catholic Church in Somerville with Father Robbie Favazza officiating. Interment will be in the Fayette County Memorial Park Cemetery on Highway 64. Following the interment, there will be a celebration of life at de Terra Vineyard and Wines of Somerville located at 605 Joyners Campground Drive from 12 noon until 4 P.M.

The family requests that memorials be directed to the Dick Fadgen Honorarium at http://supportum.memphis.edu/DickFadgen.