BUFFALO, N.Y. (AP)— Authorities say a gunman opened fire with a rifle at a supermarket in Buffalo, New York, and that officials are investigating it as a “hate crime and racially motived violent extremism.”

Law enforcement officials say 10 people were killed in the shooting Saturday afternoon and three others were wounded before the suspect was arrested. 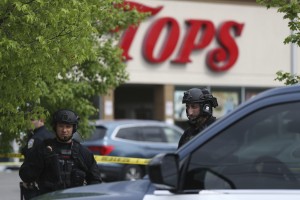 Police secure a perimeter after a shooting at a supermarket, Saturday, May 14, 2022, in Buffalo, N.Y. (AP Photo/Joshua Bessex)

Authorities identified the suspect as Payton Gendron of Conklin, New York, a community about 200 miles southeast of Buffalo.

The officials were not permitted to speak publicly on the matter and did so on the condition of anonymity.

Authorities said 11 of the victims are Black and two are white. The shooting happened in a predominantly Black neighborhood a few miles north of downtown Buffalo.