PROVIDENCE, R.I. (AP) — A Rhode Island dog whose inspiring story of going from shelter dog to life-saving police K-9 became the subject of a recent Netflix movie has been euthanized. 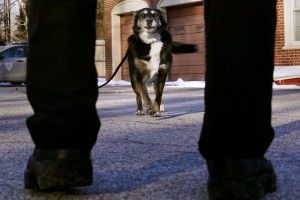 Ruby, a working K-9 for the Rhode Island State Police and former shelter dog, returns to her partner, state police Cpl. Daniel O’Neil, outside the barracks in North Kingstown, R.I., Wednesday, Feb. 16, 2022. The Australian shepherd and border collie mix will be featured in a Netflix movie titled “Rescued by Ruby”, which chronicles the dog’s life from being returned five times to a shelter as an uncontrollable pup to an eleven year veteran search and rescue K-9. (AP Photo/Charles Krupa)

The superintendent of the state police expressed gratitude for K-9 Ruby’s years of service.

In 2017, she gained notoriety after locating a teenage boy who was severely injured while hiking in the woods.

The boy was the son of the shelter worker who advocated for her. Her story was made into the 2022 Netflix movie “Rescued by Ruby.”