Warm & Quiet for Most of West TN Until Late Saturday

Thursday Forecast Update for May 19th:

Starting off with some high thin clouds against the blue sky this morning. Temperatures in the upper 60’s and low 70’s. 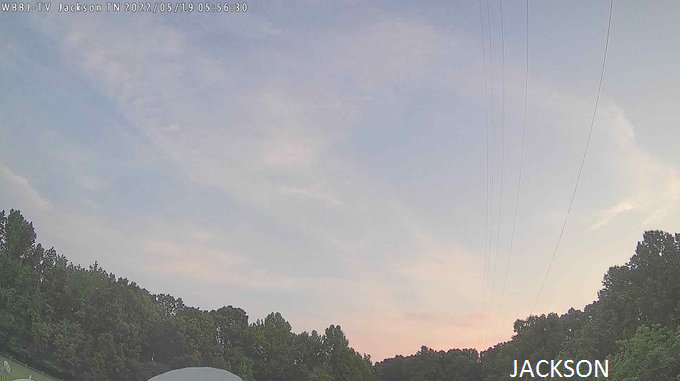 A stalled out cold front will sit just north of the Tennessee/Kentucky border on Thursday and could bring some showers or a few storms to our northern counties. Most of us will stay nice though for the next few days. Showers and storms are likely to return this weekend for all of West Tennessee. Coming up here, find out when you could be impacted by these weekend storms and the latest on the cool down heading our way on Sunday.

The heat and breezy southwest winds will again be sticking around for Thursday with highs making it up to around 90° with a heat index approaching triple digits into the afternoon and early evening hours. We are again expecting mostly sunny skies and shower free weather here in Jackson, but it could be partly cloudy at times into the afternoon. Thursday night lows will remain muggy and only fall down to around 70° again. There is again a chance for a few showers or weak storms along the Kentucky border depending on where the front stalls out as it moves through the Ohio River Valley.

The next system will begin to get a little closer on Friday increasing the clouds some into the afternoon and evening. Highs will again reach the upper 80s to near 90° but some late night storms & showers could return to try to cool us down some but we are not expecting the showers to show up until after midnight. Rain chances will be increasing into the early morning hours on Saturday and continue in coverage by the late morning and early afternoon. The winds will come out of the south keeping the humidity up for the end of the work week. Friday night lows will fall down into the upper 60s or low 70s for most of West Tennessee.

Rain showers and storms will be returning for the weekend with Saturday night into Sunday morning being the most likely time to be impacted as a cold front will pass by during the first half of day on Sunday. Skies will be partly cloudy on Saturday and the winds will change from the southwest to the north as the front passes on Sunday and that will start a cooling trend across the region. Depending on the timing of the front and cloud cover, highs will still make it into the upper 80s on Saturday. Some of the storms could be strong depending on the timing, so we will keep an eye on that situation as the week progresses in the Storm Team Weather Center.

It appears the rain chances could linger during the day on Sunday before moving out before the beginning of the next work week. Skies should try to clear during the overnight hours on Sunday. Saturday night lows will fall down into the mid 60s again and Sunday highs will struggle to get out of the low 70s. Some of the coolest weather so far this month could be returning for the start of next week. Low to mid 50s are expected to move in for Sunday night.

We saw our first 90° day on the year on May 11th and more 90s are expected over the next few weeks. Spring has officially kicked off here in West Tennessee, and there will be more chances for severe weather though as we get deeper into Spring as well. So you need to stay weather aware to changing weather patterns and monitor the forecasts closely. We got you covered in the WBBJ 7 Storm Team Weather Center as always.