(Associated Press, By: Curt Anderson)—A Florida judge has given initial approval to a settlement of more than $1 billion to families who lost loved ones in the collapse last year of a Florida beachfront condominium building in which 98 people died.

The quick settlement Saturday of the unprecedented collapse of the 12-story Champlain Towers South building means that potentially years of court battles will be avoided.

The agreement had been announced on Friday and had been awaiting Miami-Dade Circuit Judge Michael Hanzman’s approval. Hanzman said it was the best possible outcome given the loss of life and property in the June 2021 disaster. 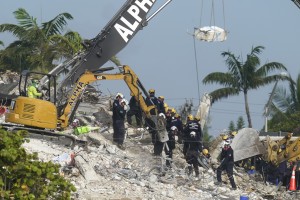 FILE – Rescue crews work at the site of the collapsed Champlain Towers South condo building after the remaining structure was demolished Sunday, in Surfside, Fla., Monday, July 5, 2021. Attorneys for the families who lost relatives or homes in last year’s collapse of a Florida condominium tower that killed 98 people finalized a $1 billion settlement on Friday, May 27, 2022. (AP Photo/Lynne Sladky, File)

Miami-Dade Circuit Judge Michael Hanzman, who is overseeing the lawsuits filed after the collapse, said during a hearing held remotely it was the best possible outcome given the loss of life and property in the disaster.

“It is a great result,” Hanzman said before giving preliminary approval to the agreement, which was announced Friday. “This was a very contested deal.”
Rachel Furst, co-chair of the attorney group representing victim families, said the agreement also means defendants — insurance companies, developers, the city of Surfside and others — will have “complete peace” that they won’t be sued again. Still, some people may decide to opt out of the deal and pursue their own independent claims.

“This was heavily negotiated,” Furst said. “We believe this is an outstanding settlement.”
Under the agreement, people involved in the settlement directly will have until June 16 to file a notice they intend to opt out. A week later on June 23, Judge Hanzman will have a fairness hearing to allow anyone objecting to the settlement to be heard.

Attorney Michael Goldberg, the court-appointed receiver handling in the case for the judge, said notice will go out to all the family members of those who died, will be posted on the Champlain Towers South website and also will be put into the Miami Herald.
“We will begin immediately,” Goldberg said.

The total for the families who lost loved ones in the collapse is about $1.02 billion. Separately, people whose condos were destroyed and lost property such as furnishings and mementos will share about $96 million.

Families of victims will have to file claims, as the money will not be split evenly. The goal is to begin distributing money by September.

The money comes from several sources, including insurance companies, engineering companies and a luxury condominium that had recently been built next door. None of the parties are admitting wrongdoing. A billionaire developer from Dubai is set to purchase the 1.8-acre (1-hectare) beachside site for $120 million, contributing to the settlement.

Only three survivors were found despite around-the-clock efforts by rescuers who dug through a 40-foot (12-meter) high pile of rubble for two weeks. Another three dozen people were able to escape from the portion of the building that remained standing. All 135 units were ultimately demolished, leaving a gaping hole along Surfside’s beachfront.

The National Institute of Standards and Technology is investigating the cause of the collapse, a process expected to take years. Champlain South had a long history of maintenance problems and questions have been raised about the quality of its original construction and inspections in the early 1980s.