Good Thursday Everyone…A few showers over parts of Benton, Decatur, And Hardin this morning as the rest of the area dries out some. Some rain showers and isolated and mostly non severe thunderstorms will continue to track through West Tennessee again Today. Lightning and brief periods of heavy rain will be the main threat. Some shower activity will linger into early to mid noon before the cold front passes. Cooler weather and plenty of sunshine is expected to return behind the front. Catch the latest details and the rest of your forecast coming up right here. 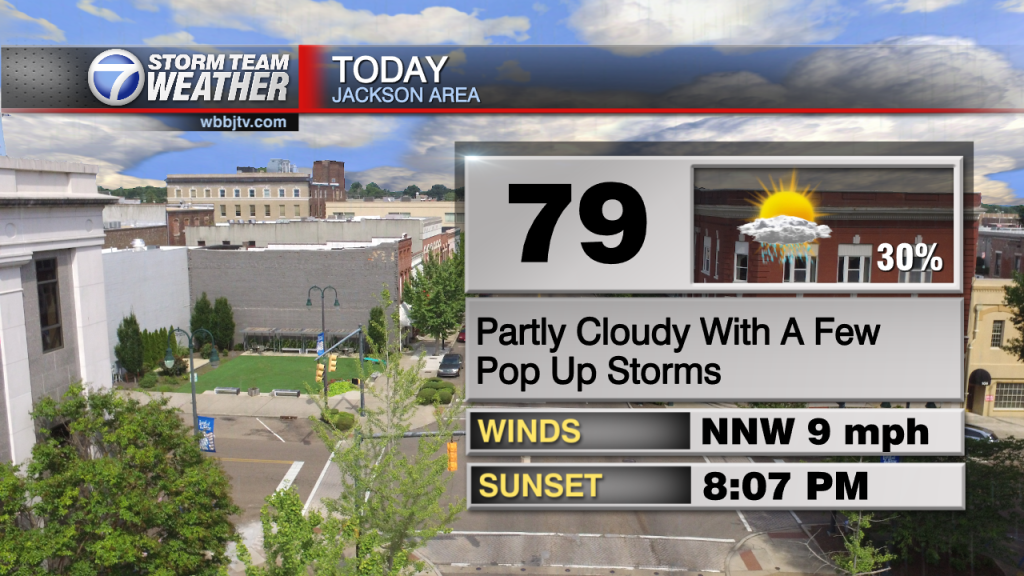 The rain and storm chances continue into mostly early afternoon Today as the next cold front will move through the Mid South. A few storms could linger near the Tennessee River south of I-40 into the late afternoon before moving out of the area in the evening. Near the Tennessee River is going to be in the greatest risk for severe storms mid to late Noon while the rest of us will be moving towards a rain free evening.

Clearing skies and much cooler weather will move in. In fact, temperatures will drop to the upper 50’s by early morning or about 12 degrees cooler than this past morning. Winds will be light and from the north. It will feel cool and Fall like with mostly clear skies in the morning and a cooler day Friday.

Some early morning showers could linger into the day on Friday depending on how fast the system moves out and cloud cover will hang around for the first half of the day as well. Skies may clear some towards Friday afternoon and evening and highs will only make it into the upper 70s on Friday behind Thursday’s front. The winds will come out of the north as well helping to keep temperatures below normal. Friday night lows will again drop into the upper 50s for most of West Tennessee.

As of now the weekend looks like it is going to pretty nice again for most of the Mid South. Highs will reach the low 80s on Saturday and mid to upper 80s could return on Sunday. Mostly sunny to partly cloudy skies are expected this weekend and showers are currently not in the forecast for Saturday. A few showers or weak storms cannot be ruled out for Sunday just yet. Weekend morning lows will fall to the upper 50s Saturday morning and low to mid 60s on Sunday morning. The winds will start out from the east this weekend before turning more to the southwest by the end of the weekend.

Most of next week looks to be hot and humid with highs in the upper 80s or low 90s. The humidity will be quite high so expect a heat index into the mid 90s for most of the week. With the high humidity and hot temperatures, some pop up showers or storms could develop each afternoon but severe weather is not expected and the storms will not impact most people across the region. Overnight lows will dip down to around 70° for the majority of the work week as well. Partly cloudy skies can also be expected each afternoon with periods of sunshine each day also.

We saw our first 90° day on the year on May 11th and more 90s are expected over the next few weeks. Spring has officially kicked off here in West Tennessee, and there will be more chances for severe weather though as we get deeper into Spring as well. So you need to stay weather aware to changing weather patterns and monitor the forecasts closely. We got you covered in the WBBJ 7 Storm Team Weather Center as always.