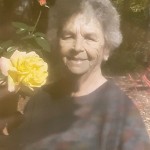 Teresa was born February 17, 1952 in Memphis, Tennessee, the daughter of the late Oren Vickery Ward and Minnie Wade Davis Ward. She received her education in the Fayette County Public School System. She was married August 8, 1968 to David Morris. Mrs. Morris was a member of Shady Grove Baptist Church in Somerville, Tennessee and was employed as an accounts payable clerk for many years before her retirement. She was known as “Mully” by her grandchildren. She adored and enjoyed spending time with them. Mully would often tell them she loved them more than peanut butter and jelly crackers.

Teresa enjoyed cooking, sewing, gardening, flowers, bird watching and watching wildlife in her yard. She was a member of the Fayette County Chapter of the Daughters of the American Revolution. Civic pride was very important to her. She spent time volunteering at polling stations during many local and national elections. She also volunteered for the American Cancer Society. Teresa had a deep love for Willie Nelson and traveled many miles just to meet him. She would volunteer at his concerts and always had a story to share involving him.

Teresa always looked forward to the Annual Davis family reunion in Bruce, Mississippi. The weekend event was always a highlight of her year. It was a time for aunts, uncles, cousins, nieces and nephews to gather. These events always involved famous and infamous time with in-laws and out-laws from all over the country.

In addition to her parents, she was preceded in death by her stepfather, James V. “Jimmy” Graham, Sr. and three brothers, James Graham, Jr., David Graham and Lanny Graham.