IRWINDALE, Calif. (AP) – Bottles of the popular Sriracha hot sauce could be hard to find on store shelves this summer.

Southern California-based Huy Fong Inc., told customers in an email earlier this year that it would suspend sales of its famous spicy sauce over the summer due to a shortage of chili peppers. 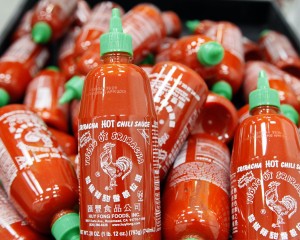 FILE – In this Oct 29, 2013 file photo, Sriracha chili sauce bottles are produced at the Huy Fong Foods factory in Irwindale, Calif. eat fiends ended the year angsting over the future of Sriracha, the trendy hot sauce with the rooster on the bottle. The trouble started when people living near the Irwindale, Calif.-based Huy Fong Foods complained that odors from its Sriracha manufacturing plant were burning their eyes. A court ordered the company to halt production until the odors could be brought under control. Then last month even shipments of already bottled Sriracha were stopped after California health officials enforced stricter guidelines that require the company to age the sauces 35 days before shipping. (AP Photo/Nick Ut, File)

The company said in its April 19 email that all orders submitted after that date would be fulfilled after Labor Day.

The company sources its peppers from various farms in California, New Mexico and Mexico.

It said that weather conditions are affecting the quality of the peppers and deepening the chili pepper shortage. It didn’t immediately respond to an email seeking comment Thursday.