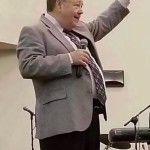 Larry was born May 3, 1955 in Memphis, Tennessee, the son of Helen White Adair and the late Aubrey Ray Adair. He served his country in the United States Navy during the Vietnam War period and was married August 5, 1974 to Corrine Washington Adair. They had two daughters (15 months apart!) Their life was centered around church. Between the two of them, they held various positions at the Millington United Pentecostal Church. Larry felt the call to the ministry at the age of 18. He preached his first sermon when he was 30 years old. From that point they assisted 3 different churches and pastored at 2.

Larry was a cabinet builder by trade. He was a minister by calling. He was a true gentleman and loved fiercely. He enjoyed making everyone laugh! His life centered around God, family and church in that order. He will be missed beyond words.

Funeral Services for Mr. Adair will be held at 11 A.M. Saturday, June 25, 2022 at New Life United Pentecostal Church in Savannah. The officiating minister will be Bro. Don Gill. He will be assisted by Bro. Steve Hendon and special remarks will be given by Bo Holley. Special music will be provided by Bro. Jamie Moore and Bro. Daniel Smith. Interment will follow in the West Union Cumberland Presbyterian Cemetery in Millington. A visitation for Mr. Adair will be from 6 to 8 P.M. Friday, June 24, 2022 at New Life United Pentecostal Church.