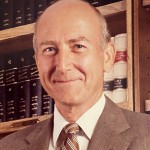 John Daly Ivy (“Jack”), age 97, of Memphis, Tennessee, died peacefully at home on June 24, 2022. Jack was born February 25, 1925, in Memphis to Fred E. Ivy and Ruth Hunter Ivy. He graduated from Central High School in 1942 and attended the University of Tennessee before his education was interrupted by World War II. In 1943 he enlisted in the U.S. Army Air Force cadet pilot program where he earned the rank of Second Lieutenant and remained stateside as a flight instructor. He returned home in 1945 to continue his studies at UT, graduating in 1948 with an accounting degree. Jack then pursued his accounting career in Memphis as a Certified Public Accountant with Peat Marwick Mitchell, one of the Big 8 accounting firms at the time. Having remained active in the Air Force Reserve, Jack was deployed to Japan in 1951 to pilot cargo missions in the Korean War. In 1952 he returned to his family and career and soon joined his former classmate, Herbert Rhea, in establishing Rhea & Ivy, a public accounting firm that grew to be the largest in the city under their leadership. Both founders took early exits to pursue second careers, with Jack quietly investing in Memphis-area small businesses during the 1980s and 1990s.

Jack (“Pop” to his family) led a full and exemplary Christian life. His sense of humor, personal integrity, engaging personality, generous spirit, and devotion to God are just a few of the characteristics that his family and friends will remember. An avid tennis player until age 90, Pop forged many friendships on the court and made sure his wife and children learned to play. His family time centered around “the lake” where water sports (along with workdays for repairs and maintenance) provided opportunities for family and friends to have fellowship and to learn life lessons from a man who put others before himself. In his golden years he and his admired brother Fred Ivy, Jr., tutored weekly at Idlewild Elementary School. Jack faithfully worshipped at Woodland Presbyterian Church, where he was an active member since the 1950s. Becoming very fond of gardening in his later years, he and his bride would sit on the patio to enjoy the beauty of his designs and his recently discovered tree-cutting expertise.

Jack is survived by his wife of 71 years Carolyn Cuningham Ivy, whom he married on December 27, 1950, in Arlington, Tennessee. Their five children, all of Memphis, also survive: Margaret “Mimi” Ivy Vestal (Gib), Ruth Daly “Dale” Ivy, John Daly Ivy, Jr. (Macon), Thomas Alexander “Alex” Ivy (Melissa), and William Hunter Ivy (Beth). He leaves eleven grandchildren and nine great-grandchildren with whom he shared a deep mutual admiration.  In addition to his parents and his brother, Jack was predeceased by two great-grandchildren.

The family expresses sincere thanks to Shirley Roberts for her loving care of Pop in his last days.

Following a 10:00AM graveside service at Arlington Cemetery on Friday, July 1, 2022, the family will welcome visitors at Woodland Presbyterian Church at 12:00PM, followed by a memorial service at 1:00PM.