(AP)–Motorcycle clubs start up all the time but then they dwindle, never growing beyond a handful of riders looking for nothing more than a few hours out of the house. Time Warp Vintage Motorcycle Club, on the other hand, has continued to grow in Knoxville since it was formed in 2003 and is now more than 250 members strong. That wasn’t always going to be the club name, though. The first thought was Club 38, as all initial members shared the same 38-inch waist size. In fact, membership forms still ask for your measurements. However, the club eventually decided to share part of its name with the host business, Time Warp Tea Room. And on this particular Tuesday, more bikes than normal gathered in Happy Holler for the group’s final meeting – at least, at this location. Time Warp Tea Room is closing, and the club’s future is a bit uncertain. 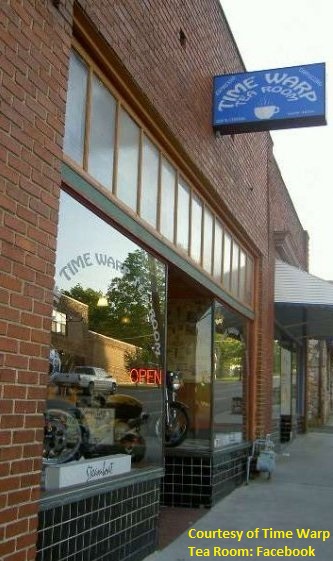 Peggy Moriarty is co-owner of Time Warp Team Room with her husband, Dan, who operated a coin-operated machine business next door until cell phones and household video game systems challenged their inventory. The business had pinball machines and jukeboxes, which ended up being perfect décor for what would become his next venture: a motorcycle-themed hangout. Dan also owned a lot of the quirky motorcycle memorabilia that adorn the walls of the Tea Room, and people have donated items to his collection over the years. “They’re all over the place,” Peggy said. “People have brought him helmets and T-shirts and just everything. We don’t know what we’re going to do with all of it.” But of all the items, an old-school photograph of her and Dan following a race at Chilhowee Park is her favorite – and yes, Peggy said, she is the trophy.

Eddie Edwards’ 1966 Sears Campus 50 bike only has about 1,100 miles on it. While members don’t get to ride their vintage bikes every day, doing so is a thrill words just can’t describe. Pat Deason is out of commission when it comes to riding following some complications with his hand. But five years ago, at age 66, he started racing on dirt again. “It’s not like getting in your car and you know you’re going to make it somewhere,” he said about vintage motorcycles. “You have to be so much more aware of everything going on around you. … If you don’t understand old machines, you’re not going to get this, but machines have life. They develop character, they develop a soul. But a new machine doesn’t have that.”

The only real requirement for joining the club is owning at least one vintage motorcycle. Some members have dozens, including 85-year-old Richard Webb, who was the sixth person to join the club. He has owned his oldest bike for 60 years. “I just ride because they need exercise,” he said about his bikes. “Sometimes I don’t even want to go for a ride, but they need to be run.” The meetings usually start around 7 p.m. and are relatively informal. Members raise their hands to share safety tips or suggest a new outing. They also talk about any new bikes they have purchased. The secret to the club’s success? It costs $5 to get into the club, one member told Knox News with a smile, and it costs $50 to leave. “Nobody can afford to get out,” he said.

At club meetings, Webb said, “all my friends are right here.” It’s rare to find two or three people with the same interests these days, let alone 250. Many members have similar stories to share and come from the same basic background, igniting their fascination for riding motorcycles when they were just kids. For older members, who never could afford a dream bike in their prime, retired life lends itself well to making up for lost time. “These are time machines; they take you back to a different period in your life,” Deason said. “You get on these motorcycles, you remember the adventures you had on them, where you were, what you did, who your buddies were. … That’s the real attraction.”

Even on the last day, co-owner Dan Moriarty stayed busy, cracking last-minute jokes with longtime customers and handing beverages across the bar. Peggy still grins at the business name. Although Time Warp sells tea, its menu is far more rooted in coffee. “We never did take on the alcohol route,” she said. “Bikers and alcohol don’t mix, to us.” Dan has always liked coffee, Peggy said, and after meeting a woman who owned a coffee shop in Bristol, the couple hired her for training prior to opening Time Warp in 2002. Coffee is even part of the club’s motto: “We want to be free to drink our expresso, ride our machines and not be hassled by the man.” This approach has resulted in mild meetings and fond friendships. Don’t expect any burnouts here.

Deason is thankful for the day he stumbled across Time Warp Tea Room after noticing vintage motorcycle gear through the window. “I had no idea what this place was,” he said. “I thought, ‘This is bizarre.’ I love old motorcycles, and here’s a place that’s devoted entirely to old motorcycles. Where do you find that?” What Deason didn’t expect to find was a community made up of members who have “encyclopedias” of knowledge about motorcycles in their heads. While members will miss the social interaction, what’s even more sad for Deason is the loss of knowledge that could happen if the group disbands. If anyone has a question about their motorcycles, there’s at least one person in the group who knows how to help.

Sometimes helping means giving a push start to a friend. Club members hope friendships like these will continue when the group visits Twisters Shakes and Sundaes on North Central Street for its next meeting. Time Warp Tea Room struggled to stay open during COVID-19 but made sure the lights were always on for the club on Tuesdays. While the Moriartys would have loved for someone to take over their business and keep its current character, the couple has sold the building to new owners in California, whose plans are still unknown. “It has really been wonderful,” Peggy said about Time Warp’s 20-year journey. “It’s really hard for us to have to close the doors. … There’s nothing else like it anywhere.”