HIGHLAND PARK, Ill. (AP) — At least six people died and 24 were wounded in a shooting at a July Fourth parade in the Chicago suburb of Highland Park, and officers are searching for a suspect who likely fired on the festivities from a rooftop, police said Monday. 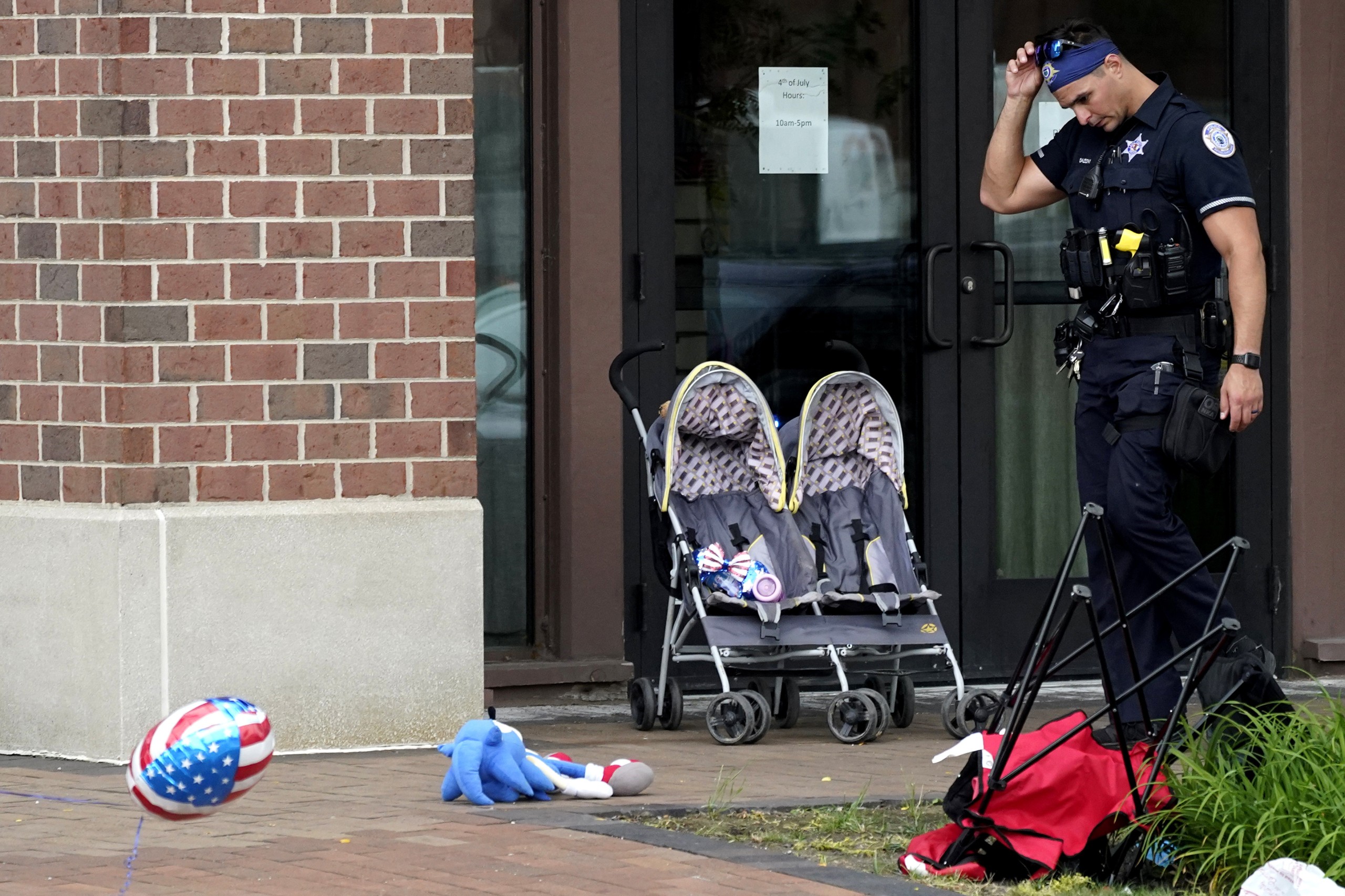 A police officer reacts as he walks in downtown Highland Park, a suburb of Chicago, Monday, July 4, 2022, where a mass shooting took place at a Highland Park Fourth of July parade. (AP Photo/Nam Y. Huh)

Highland Park Police Commander Chris O’Neill, the incident commander on scene, urged people to shelter in place as authorities search for the suspect.

Hours after the shooting, with bystanders and media standing nearby, about a dozen officers suddenly dashed for a small office building half a block from where the shooting occurred — crouching at the glass doors, before flinging them open and rushing in, rifles pointed inside into a dark foyer. It was not immediately clear why the police had entered the building.

Lake County Major Crime Task Force spokesman Christopher Covelli said at a news conference that the gunman apparently opened fire on parade-goers from a rooftop using a rifle that was recovered at the scene. He didn’t know which building.

Covelli said police believe there was only one shooter and warned that he should still be considered armed and dangerous. He and O’Neill described the shooting as random.

Police have not released any details about the victims or wounded.

“This morning at 10:14, our community was terrorized by an act of violence that has shaken us to our core,” Mayor Nancy Rotering said at the news conference. “Our hearts go out to the families of the victims at this devastating time. On a day that we came together to celebrate community and freedom, we are instead mourning the tragic loss of life and struggling with the terror that was brought upon us.”

Illinois Gov. J.B. Pritzker said in a statement: “There are no words for the kind of monster who lies in wait and fires into a crowd of families with children celebrating a holiday with their community.”

Hundreds of parade-goers — some visibly bloodied — fled the parade route after shots rang out, leaving their belongings behind. Video shot by a Sun-Times journalist after the gunfire rang out shows a band on a float continuing to play as people run past, screaming.

As of early afternoon, ominous signs of a joyous event suddenly turned to horror filled both sides of Central Street where the shooting occurred. Dozens of baby carriages, some bearing American flags, abandoned children’s bikes, a helmet bedecked with images of Cinderella were left behind in their haste. Blankets, lawn chairs, coffees and water bottles were knocked over as people fled.

Police, some in camouflage gear and many clutching AR-style weapons, continued to pour into the area.

Armed FBI agents in camouflage escorted a family with two small girls across Central Street hours after the shooting. The children looked visibly frightened even as their mother attempted to reassure them that the agents leading and flanking them would protect them.

“Don’t worry, you’re safe now,” she told them. “These guys will protect you.”

Highland Park Police initially said in a statement early Monday afternoon that five people had been killed and 19 people were taken to hospitals. but those numbers were revised at the news conference.

Gina Troiani and her son were lined up with his daycare class ready to walk onto the parade route when she heard a loud sound that she believed was fireworks — until she heard people yell about a shooter.

“We just start running in the opposite direction,” she told The Associated Press.

Her 5-year-old son was riding his bike decorated with red and blue curled ribbons. He and other children in the group held small American flags. The city said on its website that the festivities were to include a children’s bike and pet parade.

Troiani said she pushed her son’s bike, running through the neighborhood to get back to their car.

In a video that Troiani shot on her phone, some of the kids are visibly startled at the loud noise and they scramble to the side of the road as a siren wails nearby.

It was just sort of chaos,” she said. “There were people that got separated from their families, looking for them. Others just dropped their wagons, grabbed their kids and started running.”

Debbie Glickman, a Highland Park resident, said she was on a parade float with coworkers and the group was preparing to turn onto the main route when she saw people running from the area.

She didn’t hear any noises or see anyone who appeared to be injured.