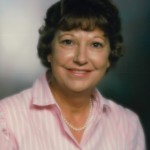 Anita passed away suddenly on Thursday, June 30, 2022, in Anchorage, Alaska while on vacation with her husband, James Q. Richardson and grandson, Jackson K. Morrison.

Anita was born on November 4, 1944 to Oscar John Gasser and Opal Alberta Gasser. She spent most of her early life in Southeast Missouri and graduated from Richland High School in Gray Ridge, Missouri.

After spending a great deal of love and time raising her two children, Anita worked at J.C. Penney, John R. Thompson Realty and Bartlett Mortgage. Her complete devotion to her husband, children and grandchildren remained throughout her whole lifetime. She was truly the guiding and loving matriarch of the family. She enjoyed traveling and seeing all parts of the country. She will be missed tremendously leaving an irreplaceable void to those who loved her.

In addition to her parents, she was preceded in death by two brothers, Lonnie Gasser and John Gasser. She is survived by one brother, David Wayne Gasser, two children, seven grandchildren and four great grandchildren.

A visitation for Mrs. Richardson will be from 5 to 7 P.M. Wednesday, July 6, 2022 at the Peebles West Funeral Chapel at Oakland. Graveside Services will be held at 9 A.M. Thursday, July 7, 2022 at Fayette County Memorial Park Cemetery on Highway 64 with Bro. Mike Hollaway, pastor of Bethlehem Baptist Church in Rossville, officiating.