We officially topped out at 99° here in Jackson Today as the heat index hovered around 110°. The heat index Wednesday was between 106-115° and we’ll be doing it again Tomorrow.  For the second time in 2022 the National Weather Service in Memphis has issued an Excessive Heat Warning for sections of West Tennessee expected to last until at least Thursday evening with a heat advisory lasting into Friday.

Jackson has not hit 100° since around the 4th of July in 2012, a decade ago. Please be aware of the heat and take necessary precautions to avoid heat stroke or exhaustion if you plan on spending extended time outdoors this week. This is the 2nd excessive heat warning issued for West Tennessee this summer. That rarely has happened in recorded history.

Mostly clear skies and calm winds can be expected for most of the night. A shower or two cannot be ruled out around the time the sun sets but rain chances will be slim. Overnight lows will fall down to the upper 70s due to the high humidity lingering around the region.

We are going to be even hotter on Thursday as many of us will see highs reaching 100° with a heat index above 109° and approaching 115° at times in the late afternoon and early evening hours. The winds will come out of the southwest all day long. Mostly sunny skies will again stick around for most of the day and some of us will get lucky and see a rain shower move through to cool things down some. The bad news is, rain chances again only are around 20% on Thursday. Expect upper 70s again for overnight lows. 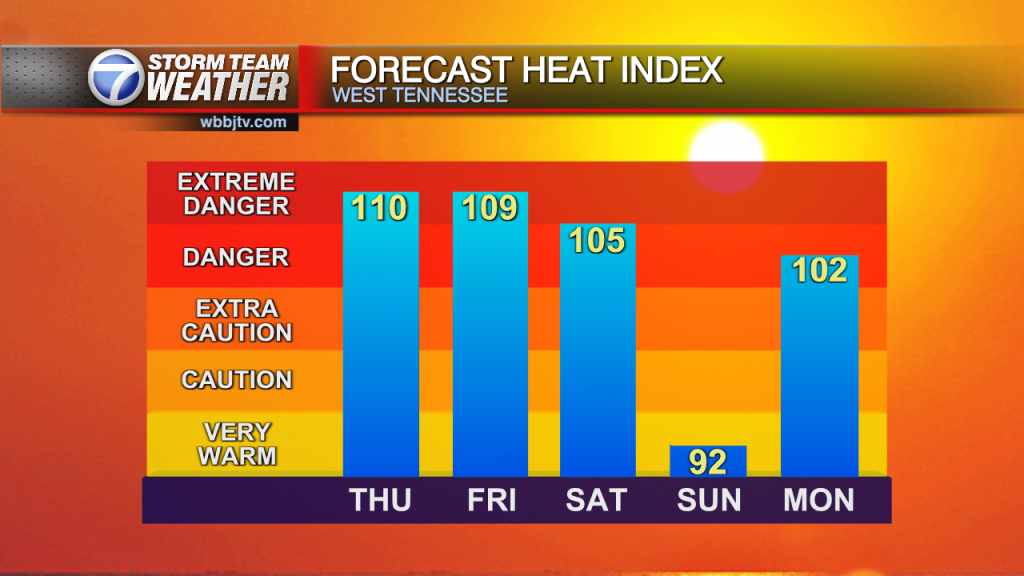 The hottest day of the week and the most likely day to top 100° is going to be on Thursday. We also will see a decent shot for some late afternoon and evening showers and weak storms late Friday into Saturday with cooler air coming in shortly after.

Highs on Saturday should be a little less than lately at around 94 for the high and scattered more numerous storms. Storms move out by Sunday morning leaving behind the coolest day we’ll have had in a while as temperatures top out at 90-92. The heat will quickly return by afternoon Monday so enjoy the brief break in the extreme heat.

We saw our first +95° day on the year in June and some upper 90s or low 100s are expected over the next few weeks as well. The official start of summer kicked off on Tuesday June 21st, and there will be more chances for severe weather  and heat waves though as we approach the start of summer. So you need to stay weather aware to changing weather patterns and monitor the forecasts closely. We got you covered in the WBBJ 7 Storm Team Weather Center as always.