LOS ANGELES (AP) — Tony Sirico, who played the impeccably groomed mobster Paulie Walnuts in “The Sopranos” and brought his tough-guy swagger to films including “Goodfellas,” died Friday. He was 79. 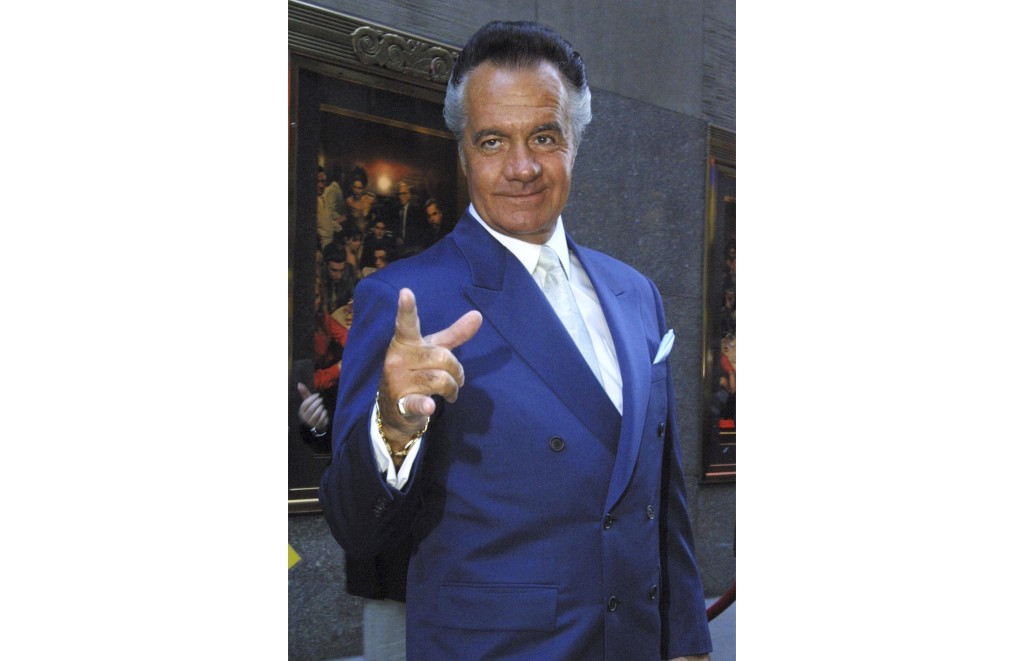 FILE – Tony Sirico who plays Paulie Walnuts on the HBO series “The Sopranos” arrives for the premiere of the show’s fourth season in this Thursday, Sept. 5, 2002, at New York’s Radio City Music Hall. Sirico, who played the impeccably groomed mobster Paulie Walnuts in “The Sopranos” and brought his tough-guy swagger to films including “Goodfellas,” died Friday, July 8, 2022. He was 79. (AP Photo/Tina Fineberg, File)

Sirico died at an assisted living facility in Fort Lauderdale, Florida, said his manager, Bob McGowen. There was no immediate information on the cause of death.
A statement from Sirico’s family confirmed the death of Gennaro Anthony “Tony” Sirico “with great sadness, but with incredible pride, love and a whole lot of fond memories.”
McGowan, who represented Sirico for more than two decades, recalled him as “loyal and giving,” with a strong philanthropic streak. That included helping ex-soldiers’ causes, which hit home for the Army veteran, his manager said.
Steven Van Zandt, who played opposite Sirico as fellow mobster Silvio Dante on “The Sopranos,” saluted him on Twitter as “legendary.”
“A larger than life character on and off screen. Gonna miss you a lot my friend,” the actor and musician said.
Michael Imperioli, who portrayed Christopher Moltisanti on “The Sopranos,” called Sirico his “dear friend, colleague and partner in crime.”
“Tony was like no one else: he was as tough, as loyal and as big hearted as anyone i’ve ever known,” Imperioli said on Instagram.
Sirico was unconcerned about being cast in a string of bad guy roles, McGowan said, most prominently that of Peter Paul “Paulie Walnuts” Gualtieri in the 1999-2007 run of the acclaimed HBO drama starring James Gandolfini as mob boss Tony Soprano. (Gandolfini died in 2013 at age 51).
“He didn’t mind playing a mob guy, but he wouldn’t play an informant,” or as Sirico put it, a “snitch,” McGowan said.
Sirico, born July 29, 1942, in New York City, grew up in the Flatbush and Bensonhurst neighborhoods where he said “every guy was trying to prove himself. You either had to have a tattoo or a bullet hole.”
“I had both,” he told the Los Angeles Times in a 1990 interview, calling himself “unstable” during that period of his life. He was arrested repeatedly for criminal offenses, he said, and was in prison twice. In his last stint behind bars, in the 1970s, he saw a performance by a group of ex-convicts and caught the acting bug.
“I watched ’em and I thought, ‘I can do that.’ I knew I wasn’t bad looking. And I knew I had the (guts) to stand up and (bull) people,” he told the Times. “You get a lot of practice in prison. I used to stand up in front of these cold-blooded murderers and kidnapers — and make ’em laugh.”
Sirico also was cast outside the gangster mold, playing police officers in the films “Dead Presidents” and “Deconstructing Harry.” Among his other credits were Woody Allen films including “Bullets over Broadway” and “Mighty Aphrodite,” and appearances on TV series including “Miami Vice” and voice roles on “Family Guy” and “American Dad!”
Sirico is survived by daughter Joanne Sirico Bello; son Richard Sirico; his brother, Robert Sirico, a priest; and other relatives.

For more new happening in the U.S., click here.

Pumpkin spice and everything nice