JACKSON, Miss. (AP) — A man has been indicted on a murder charge a year after a former Mississippi lawmaker was shot to death while she was doing yard work in a rural area where her sister-in-law had died.

Republican former state Rep. Ashley Henley, 40, was killed in June 2021 outside the burned-out mobile home where her sister-in-law, Kristina Michelle Jones, was found dead in December 2020. 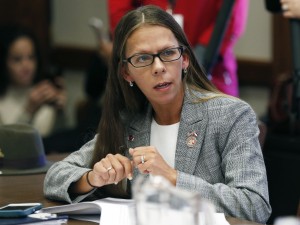 FILE – House Education Committee member Ashley Henley, R-Southaven, asks a question about teacher pay raise legislation presented before the committee on Jan. 31, 2019, at the Capitol in Jackson, Miss. Billy Lamar Brooks has been indicted on a murder charge a year after the former Mississippi lawmaker was shot to death while she was doing yard work in a rural area where her sister-in-law had died. (AP Photo/Rogelio V. Solis, File)

Henley and other relatives contended Yalobusha County authorities were doing too little to examine possible criminal charges in Jones’ death. Relatives erected a homemade sign at the site with photos of Jones under the phrase, “I was murdered.”

Yalobusha County coroner Ronnie Stark said Henley had been mowing grass at the home site before she was killed.

A man who had lived near Jones, Billy Lamar Brooks, was indicted in February on a charge of maliciously setting fire to the home of Jones and Terry Henley. Court records show that on June 30, a grand jury filed a new indictment against Brooks to add a murder charge in the death of Ashley Henley.

The Associated Press reached Brooks’ attorney, Bradley Peeples, by phone Saturday and he declined to comment on the case.

Court records show Brooks made a court appearance Thursday, and Circuit Judge Smith Murphey set his bond at $250,000. Brooks remained in the Yalobusha County jail on Saturday, according to the jail docket. His age and current address were not available.

After Ashley Henley was killed, investigators said her body had been found on June 13, 2021. The indictment of Brooks accuses him of killing her on or about June 14, 2021.

Ashley Henley served in the Mississippi House from 2016 to 2020 in a district in DeSoto County, about 70 miles (115 kilometers) north of where she was killed.

Henley was a teacher before she was elected to office, and she often took her young son to the state Capitol during legislative sessions.

Henley sought a second term in November 2019 and lost by 14 votes to a Democrat. She challenged the election results, saying she believed she had found some voting irregularities. A bipartisan House committee held a public hearing on her challenge and unanimously dismissed her request for a new election.