MILAN, Tenn. — “It was just god-sent. It felt like they were at the right place at the right time because, honestly, we did not think anyone was going to stop,” said Mariah Hill, the mother.

Good Samaritans became heroes by getting a Milan couple to the hospital in the nick of time. 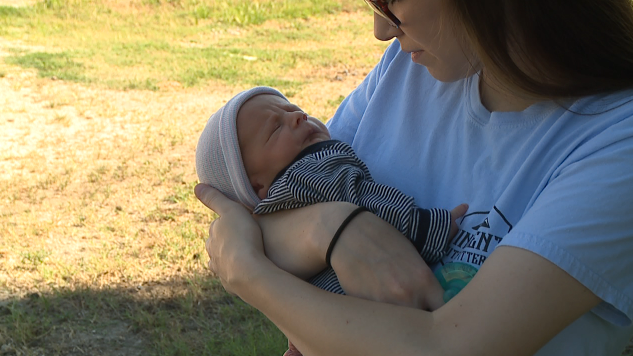 Hill was in labor and on the way to the hospital with her husband when their car broke down. They were five minutes from their destination.

“My car completely shuts off. Everything just stops, and he’s like, ‘Oh no. Oh no.’ I need to push right now. I’m about to push him out. So he gets out of the car and stands in the middle of the road and is waving people down, just hands up in the air trying to stop anybody,” Hill said.

After several cars passed, a truck with four men stopped and immediately rushed to the rescue. Hill says they sped to the Baptist Memorial Hospital in Union City.

“Notified them that I was in labor, about to have a baby outside in his truck. They brought the wheelchair out, and as soon as we walked into the hospital, there were three doctors and the nurses. They were waiting on us,” Hill said.

She says as soon as she got into the delivery room, she gave birth to her son, named Dallas Blackwell.

“We got to labor and delivery at 8 a.m. and Dallas was born at 8:02 a.m. So there was enough time for me to get in the room. Get into the bed and that was it,” Hill said.

With no time to grab the names of their heroes, Hill took to social media to find who helped them get to the hospital. And she says it didn’t take long to find them.

“We were having a baby, absolutely terrified that we weren’t going to make it. So it was great. It was so nice to actually thank them in a way that they deserve to be thanked for what they did for us,” Hill said.

Hill says they were grateful that the men decided to stop, and says she can’t wait for Dallas to meet them.