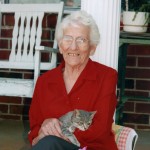 Quilla Tapp Hightower was born on September 15, 1917, in MS to Thomas Oliver Tapp and Sarrah Hodum Tapp. She was a homemaker all her life. She truly lived a long and meaningful life. She was a member of Keeling Baptist Church in Stanton. She enjoyed cooking, gardening, yardwork, supporting her church and spending time with her precious family.

In lieu of flowers, the family has requested memorials be made to Keeling Baptist Church, 16675 Hwy 70 West, Stanton, TN 38069. All services and arrangements are under the direction of the Lea & Simmons Funeral Home in Brownsville, TN.