WASHINGTON (AP) — Democrats have pushed legislation through the House that would inscribe the right to use contraceptives into law. It’s Democrats’ latest campaign-season response to concerns that a conservative Supreme Court that’s erased federal abortion rights could go further. House passage sends the measure to the Senate, where the bill’s fate seems uphill. The push illustrates how Democrats are latching onto their own version of culture war battles to appeal to female, progressive and minority voters. Democrats are casting the court and Republicans as extremists intent on obliterating rights taken for granted for years. 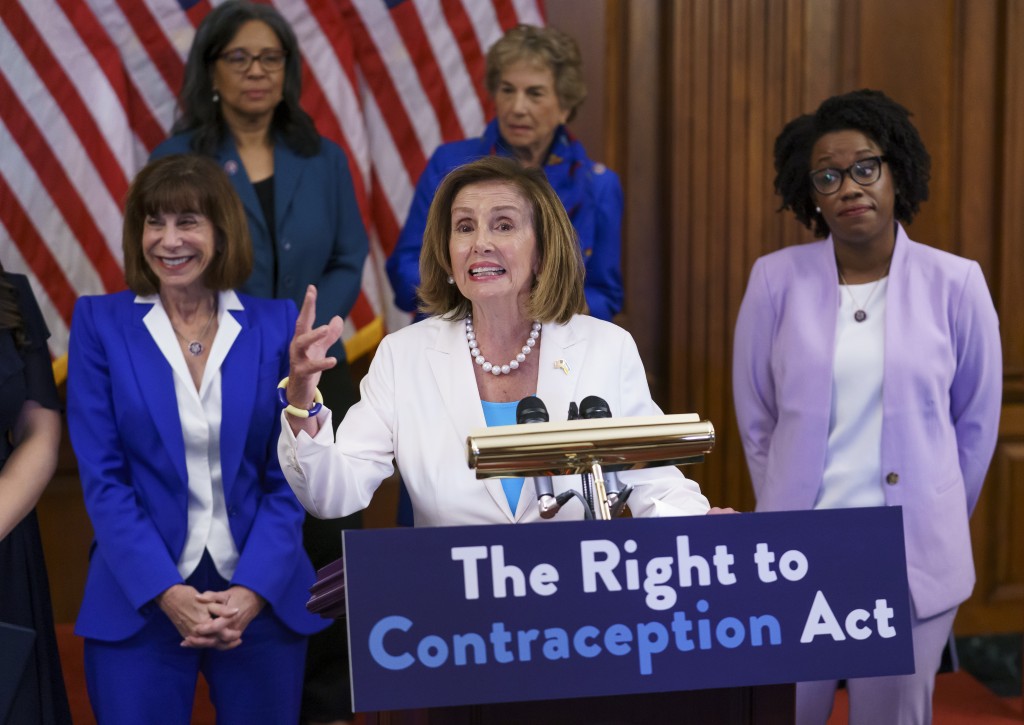 Speaker of the House Nancy Pelosi, D-Calif., makes a point during an event with Democratic women House members and advocates for reproductive freedom ahead of the vote on the Right to Contraception Act, at the Capitol in Washington, Wednesday, July 20, 2022. She is flanked by Rep. Kathy Manning, D-N.C., and Rep. Lauren Underwood, D-Ill. Democrats are pushing legislation through the House that would inscribe the right to use contraceptives into law. (AP Photo/J. Scott Applewhite)

WASHINGTON (AP) — The right to use contraceptives would be inscribed into law under a measure that Democrats pushed through the House on Thursday, their latest campaign-season response to concerns a conservative Supreme Court that already erased federal abortion rights could go further.

The House’s 228-195 roll call was largely along party lines and sent the measure to the Senate, where its fate seemed uphill. The bill is the latest example of Democrats latching onto their own version of culture war battles to appeal to female, progressive and minority voters by casting the court and Republicans as extremists intent on obliterating rights taken for granted for years.

Democrats said that with the high court recently overturning the landmark Roe v. Wade decision from 1973, the justices and GOP lawmakers are on track to go even further than banning abortions.

“This extremism is about one thing: control of women. We will not let this happen,” said Rep. Kathy Manning, D-N.C., who sponsored the legislation. All of the bill’s nearly 150 co-sponsors are Democrats.

In his opinion overturning Roe last month, Justice Clarence Thomas wrote that the court should now review other precedents. He mentioned rulings that affirmed the rights of same-sex marriage in 2015, same-sex intimate relationships in 2003 and married couples’ use of contraceptives in 1965.

Thomas did not specify a 1972 decision that legalized the use of contraceptives by unmarried people as well, but Democrats say they consider that at risk as well.

Republicans accused Democrats of manufacturing a crisis, saying there is no serious effort underway to erase the right to use contraceptives.

“If we allow the majority to undermine constitutional safeguards for an imagined and fake emergency, they will create more imagined emergencies in the future to violate and undermine our constitutional principles,” Rep. Claudia Tenney, R-NY., said during the debate. She said Democrats wanted to “distract and scare the American people and score cheap political points.”

The measure’s fate seemed unclear in the 50-50 Senate, where at least 10 Republicans would have to support the bill for it to reach the 60 votes needed for most legislation to pass.

House Democrats have begun forcing votes on these and other issues related to privacy rights, hoping for long-shot victories or to at least energize sympathetic voters and donors and force Republicans from competitive districts in difficult spots. The House voted last week to revive a nationwide right to abortion, with every Republican voting no, and voted largely along party lines to bar prosecuting women traveling to states where abortion remains legal.

The House voted Tuesday to keep same-sex marriage legal, with 47 Republicans joining all Democrats in backing the measure. Though 157 Republicans voted no, that tally raised expectations that the bill could win enough support for GOP senators to pass, sending it to President Joe Biden for his signature.

The bill lets the federal and state government, patients and health care providers bring civil suits against states or state officials that violate its provisions.

Same-sex marriage may have such broad public acceptance that growing numbers of Republicans are willing to vote for it. But anti-abortion groups oppose the contraception legislation, and it remains to be seen if significant numbers of GOP lawmakers are willing to make that break.

Susan B. Anthony Pro-Life America said the legislation “seeks to bail out the abortion industry, trample conscience rights, and require uninhibited access to dangerous chemical abortion drugs.” The National Right to Life Committee said it “goes far beyond the scope of contraception” and would cover abortion pills like RU486, which supporters said was incorrect.

The measure drew a mixed reaction from two of the Senate’s more moderate Republicans.

Sen. Susan Collins, R-Maine, said she was “most likely” to support the measure. Sen. Lisa Murkowski, R-Alaska, demurred, saying she was working on bipartisan legislation that she said would codify the rights to abortion and perhaps for contraception.

There are few state restrictions on contraceptive use, said Elizabeth Nash, who studies state reproductive health policies for the Guttmacher Institute, a research organization that supports abortion rights.

Nash said she was concerned that there will be efforts to curb emergency contraceptives and intrauterine devices and to help providers and institutions refuse to provide contraceptive services.