Body near Lake Mead swimming site 3rd to surface since May

LAS VEGAS (AP) — Another body has surfaced at Lake Mead — this time in a swimming area where water levels have dropped as the Colorado River reservoir behind Hoover Dam recedes because of drought and climate change. 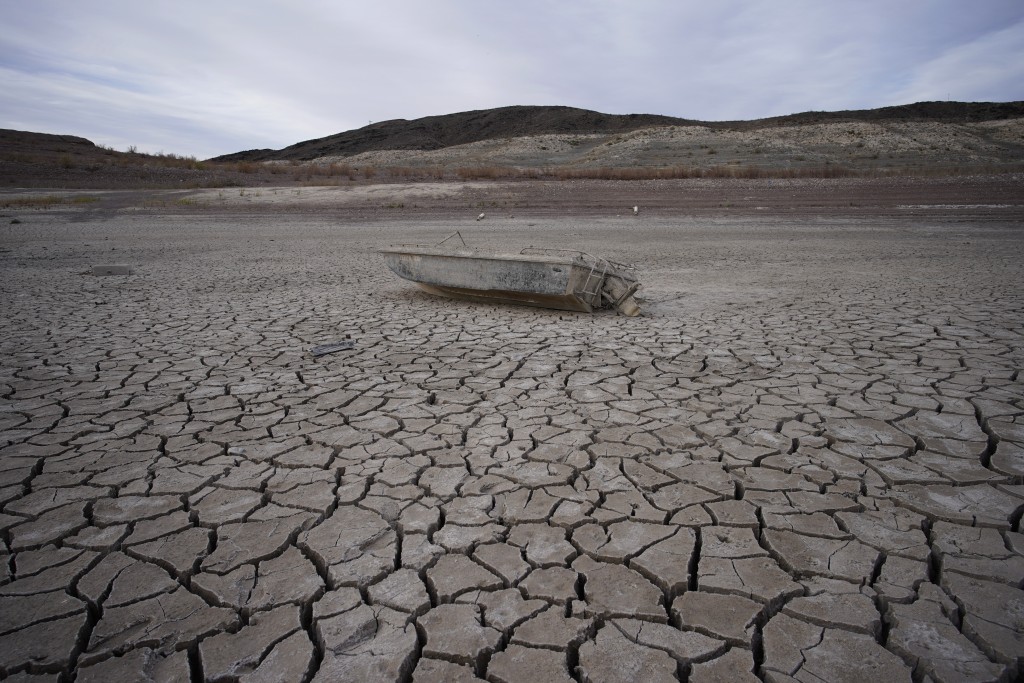 FILE – A formerly sunken boat sits on cracked earth hundreds of feet from the shoreline of Lake Mead at the Lake Mead National Recreation Area on May 10, 2022, near Boulder City, Nev. Another body has surfaced at Lake Mead, this time in a swimming area where water levels have dropped as the Colorado River reservoir behind Hoover Dam recedes due to drought and climate change. The National Park Service did not say in a statement how long officials think the corpse was submerged in the Boulder Beach area before it was found Monday, July 25, 2022, by people who summoned park rangers. (AP Photo/John Locher, File)

The National Park Service did not say in a statement how long officials think the corpse was submerged in the Boulder Beach area before it was found Monday by people who summoned park rangers.

Clark County Coroner Melanie Rouse said Tuesday it was partially encased in mud at the water line of the swimming area along the shore north of Hemenway Harbor marina.

The gender of the dead person was not immediately apparent, Rouse said, and it was too early to tell a time, cause and manner of death. Investigators will review missing persons records as part of the effort, Rouse said.

The corpse was the third found since May as the shoreline retreats at the shrinking reservoir between Nevada and Arizona east of Las Vegas. The lake surface has dropped more than 170 feet (52 meters) since the reservoir was full in 1983. It is now about 30% full.

The coroner said her office was continuing work to identify a man whose body was found May 1 in a rusted barrel in the Hemenway Harbor area and a man whose bones were found May 7 in a newly surfaced sand bar near Callville Bay, more than 9 miles (14.5 kilometers) from the marina.

On July 6, the body of a 22-year-old Boulder City woman was found in the water near where she disappeared while riding a personal watercraft. Rouse said it may take several weeks to determine her cause of death.

The case of the body in the barrel was being investigated as a homicide after police said the man had been shot and his clothing dated to the mid-1970s to early 1980s.

The discoveries have prompted speculation about long-unsolved missing person and murder cases dating back decades — to organized crime and the early days of Las Vegas, which is just a 30-minute drive from the lake.

The drop in the lake level comes while a vast majority of peer-reviewed science says the world is warming, mainly because of rising levels of carbon dioxide and other greenhouse gases in the atmosphere. Scientists say the U.S. West, including the Colorado River basin, has become warmer and drier in the past 30 years.