If monkeypox spreads through sexual contact, is it an STD?

NEW YORK (AP) — For most of the six decades that monkeypox has been known to affect people, it was not known as a disease that spreads through sex. Now that has changed. 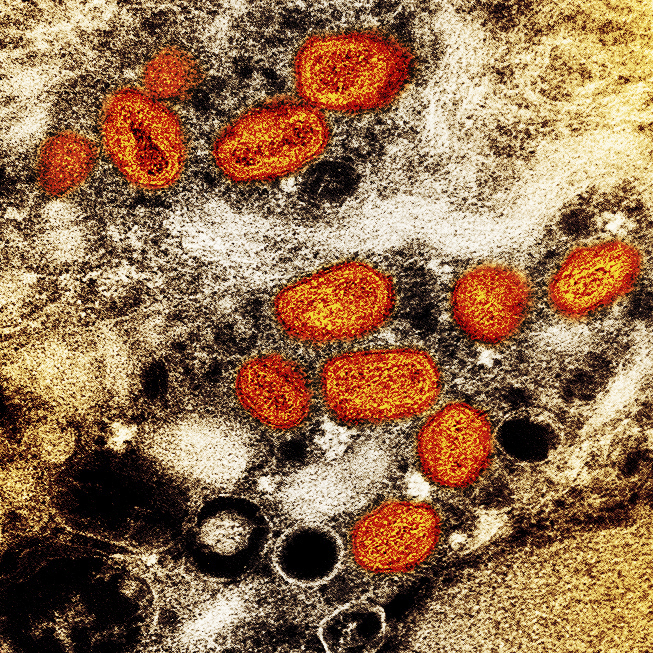 This iamge provided by the National Institute of Allergy and Infectious Diseases (NIAID) shows a colorized transmission electron micrograph of monkeypox particles (orange) found within an infected cell (brown), cultured in the laboratory. This image was captured at the NIAID Integrated Research Facility (IRF) in Fort Detrick, Md. The World Health Organization recently declared the expanding monkeypox outbreak a global emergency. It is WHO’s highest level of alert, but the designation does not necessarily mean a disease is particularly transmissible or lethal. (NIAID via AP)

The current outbreak is by far the biggest involving the virus, and it’s been designated a global emergency. So far, officials say, all evidence indicates that the disease has spread mainly through networks of men who have sex with men.

“It clearly is spreading as an STI (sexually transmitted infection) at this point,” said Dr. Tom Inglesby, director of the Johns Hopkins Center for Health Security.

To protect the people at highest risk while trying to contain the spread, public health agencies are focusing their attention on those men — and attacking the virus based on how it’s behaving now.

On Wednesday, the head of the World Health Organization advised men at risk for monkeypox to consider reducing their sexual partners “for the moment.”

But this is a complicated outbreak that may shift in how it spreads and which population groups are most affected. There is also debate about whether monkeypox should be called a sexually transmitted disease, with some critics complaining that the term creates a stigma and could be used to vilify gay and bisexual men.

Monkeypox can spread in nonsexual ways too, and it’s not enough to use condoms or other typical measures for stopping STDs, Inglesby and other experts say.

Here’s what we know.

WHAT MAKES SOMETHING AN STD?

A sexually transmitted disease is commonly defined as one that mainly spreads through sexual contact. But some STDs can be spread in other ways, too. HIV can spread through shared needles. Syphilis can spread through kissing. A common, parasite-caused sexual infection called trichomoniasis has been found to spread through the sharing of damp, moist objects like sponges or towels.

Monkeypox has not usually spread easily among people, and experts are still trying to understand exactly how it moves from person to person. In Africa, where small outbreaks have been common for years, people have been infected through bites from rodents or small animals.

But in May, cases began emerging in Europe, the United States and elsewhere that showed a clear pattern of infection through intimate contact with an infected person, like many other sexually transmitted diseases.

The public health workers who respond to outbreaks play a large role how they are framed. Much of the work on monkeypox has been done by professionals who operate sexual health clinics or specialize in STDs.

Indeed, the U.S. government’s response needs to be led by people with that expertise, said David C. Harvey, executive director of the National Coalition of STD Directors.

“The STD field has a wealth of knowledge and expertise in these areas developed over decades fighting various outbreaks and diseases affecting the very communities … we’re seeing monkeypox taking a toll on today,” Harvey said in a statement.

WHO IS GETTING MONKEYPOX?

WHO officials said last week that 99% of all the monkeypox cases beyond Africa were in men and that of those, 98% involved men who have sex with men. Experts suspect that monkeypox outbreaks in Europe and North America were ignited by sex at two raves in Belgium and Spain.

The statistics are the same for cases reported in the United States, according to the Centers for Disease Control and Prevention. As in Europe, cases have emerged in other groups too, including at least 13 people who were female at birth and at least two children.

Last week, the New England Journal of Medicine published a study of hundreds of monkeypox infections in 16 countries. It found that the suspected means of transmission in 95% of the cases was sexual close contact, as reported by doctors. The researchers noted that it was impossible to confirm sexual transmission.

WHY IS THERE A DEBATE ABOUT CALLING IT AN STD?

While there is broad agreement among health officials that monkeypox is being transmitted during sexual encounters, some experts debate whether it should be called an STD. They worry that the term unfairly stigmatizes and that it could undermine efforts to identify infections and tame the outbreak.

When a disease is defined as a sexually transmitted infection that mainly affects men who have sex with men, many people may begin to think of it as “a gay disease” that poses no risk to them, said Jason Farley, an epidemiologist at the Johns Hopkins School of Nursing.

That’s what happened in the early days of the AIDS epidemic in the 1980s, which contributed to the spread of HIV to other groups. Farley said.

“We learn nothing from our history,” said Farley, who is gay.

The WHO recommendation that at-risk men limit their sexual partners is sensible public health advice, he said. But it also amplifies “the message that this is a gay disease,” he said.

“This is the fine line between having a public health approach that focuses on the epidemiology of now, compared to the likelihood of the continued emergence of new cases in” the general community, he said.

“Monkeypox is not a sexually transmitted infection,” he said. “It is an infection that can be transmitted with sexual contact.”

WHAT IS KNOWN ABOUT TRANSMISSION?

Some researchers have found evidence of the monkeypox virus in semen. A study in Spain found monkeypox virus DNA in the semen of some infected men, as well as in saliva and other body fluids. But the study didn’t answer whether the virus actually has spread through semen.

Sorting that out could affect the understanding of not only how men spread the infection, but also how long they might be contagious. Evidence of some other viruses — like Ebola and Zika — has been found in the semen of some men months after they were thought to be fully recovered.

Meanwhile, scientists believe the primary route of transmission during the current outbreak has been skin-to-skin contact during sexual encounters with someone who has symptoms. In that respect, it’s similar to herpes, some experts noted.

The virus also may spread through saliva and respiratory droplets during prolonged, face-to-face contact, such as during kissing and cuddling — a kind of spread that can occur outside of sex.

Researchers are exploring how often, and in what situations, that kind of spread might happen, said Christopher Mores, a professor of global health at George Washington University.

“We would do ourselves a disservice to try and exclude anything from the realm of possibility at this point,” he said.

Officials also say people can catch monkeypox from touching items that previously touched an infected person’s rash or body fluids, such as towels or bedsheets. That is thought to explain the infections of the U.S. children.

WHY ARE THESE DETAILS IMPORTANT?

It’s important to understand exactly how monkeypox spreads in order to give people the information they need to protect themselves, health officials say.

That said, health officials believe those who are currently at the highest risk are gay or bisexual men who have sex with multiple partners. That understanding has shaped much of the work to contain the outbreak, including prioritization of the supply of vaccines and treatments.

The government has been shipping a monkeypox vaccine, but the supply is limited. So far it’s only been recommended as a post-exposure treatment or for people who have had multiple sex partners in the past two weeks in a place where monkeypox cases have been reported.

The vaccine is new, and officials are trying to gather data on exactly how well it works.