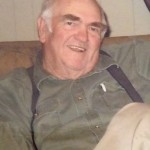 Alvin Lawrence “Sonny” Hayes, Sr. died peacefully at his country home in Bells on July 27, 2022, surrounded by his family at the age of 86. Sonny was born on March 9, 1936, in Madera, California to his parents Samuel “Rawdie” and Pearle Hayes. When Sonny was three years old, his family moved back East and would eventually settle in Forked Deer. He spent his boyhood at this home, which stands to this day, with his parents, sister Lois Ruth and six brothers, O’neal, Charles “Buddy”, Warren “Billy”, Hoyt, Dale, and Johnny. His brothers would later predecease him. Helping out on the family farm gave Sonny a love for the land so that he would go on to be a lifelong farmer after graduating Haywood High School and serving in the Army.

In 1958, he married the love of his life, Charlotte Marie White. They raised five children: Alvin Lawrence Hayes, Jr. (Cindy), Alison Pyron (Jerry), Warren Hayes (Jane-deceased), Beverly Moss (George), and Erin Wheat (Hugh). Having farming interests in Belle Eagle, Stanton, and later Macon, Mississippi, he provided for his family through row crops, cattle and catfish and was the chief fish fryer at many family gatherings. In his retirement, he was a loving caregiver to Charlotte who fought a long, hard battle with diabetes, until her death in 2006. His final years were spent in Bells, beating his grandchildren in checkers and cards. He was a quiet and gentle soul who shared his dry wit with those who loved him best and will miss him most. Along with his sister and his children, Sonny leaves behind nineteen grandchildren: Jennifer Blakney (Barney) and Hodge Hayes (Jenna); Logan (Tiffany) and Samuel Pyron (Sabrina); Kase Hayes; Joy Moore (Joey), Delie Hoverson (Caleb), Anna, George, Samuel, Thomas, William, James, and John Moss; and Charlie, Hayes, Alvin, Elizabeth, and David Wheat, and five great grandchildren: Hunter Criswell, SJ and Spencer Pyron, Annie Pyron, and Hosanna Hoverson. He was adored by many nieces and nephews and will be greatly missed by his caregiver Amber Henry.

In lieu of flowers, donations may be made to the charity of the Donor’s Choice.