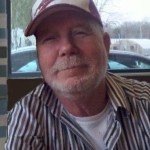 Larry retired from the United States Air Force as Master Sergeant. He was a member of TVCC and he liked fishing and hunting. He was an avid coin collector.

Besides his parents, Larry was also preceded in death by a brother, James D. Hastings, Jr.

In lieu of flowers, the family requests memorials be made to: